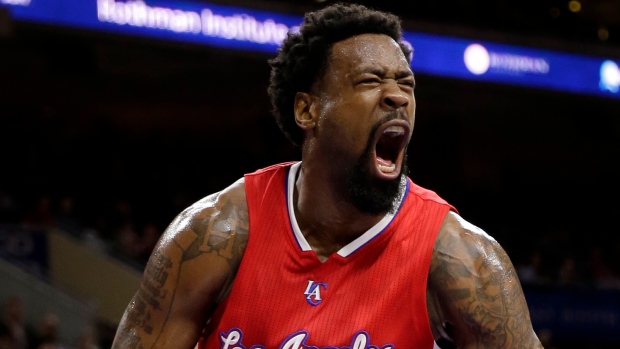 PHILADELPHIA - At one time, just making the playoffs would have been cause for celebration for the Los Angeles Clippers. This year, that accomplishment went practically unnoticed.

Chris Paul scored 25 points, DeAndre Jordan had 17 points and 20 rebounds, and the Clippers extended a franchise record by clinching a playoff berth for the fourth straight season with a 119-98 win over the Philadelphia 76ers on Friday night.

Los Angeles had made the playoffs just once in 14 seasons prior to the 2011-12 season. But the talented Clippers aren't satisfied with merely getting in the post-season these days.

"What, we clinched tonight?" Paul responded when told. "There are a few teams in the league who get to the playoffs and consider it a successful year. For us, we're playing for more than that. That's just how it is. I'm not trying to be ungrateful, but we're playing for a bigger purpose."

J.J. Redick added 19 points for the Clippers, who won their sixth consecutive game to help their chances for home-court advantage in the first round of the Western Conference playoffs. Los Angeles began the day in fifth place — one game behind Portland, which played at Phoenix later.

Rookie Nerlens Noel had career-high 30 points and 14 rebounds for Philadelphia. The 76ers, in rebuilding mode, have the third-worst record in the NBA and own six picks — including two first-rounders — in the upcoming NBA Draft.

"It's a great learning experience for us," Noel said.

Los Angeles put all five starters in double-figures in an offensive performance that showed why the Clippers are contenders in the talented West. Matt Barnes scored 15 points and Blake Griffin tallied 10, but they and the rest of the starters just watched in the fourth quarter.

Los Angeles led by 19 points in the first half but entered the third quarter up just eight, 62-54. But the Clippers scored the first eight points of the second half to double the lead with just under 9 minutes left in the period, and extended the advantage to 92-66 on Jordan's alley-oop dunk with 1:58 to go.

Philadelphia missed its last 10 shots of the third quarter and the Clippers led by as many as 32 in the fourth quarter.

"We defended and jumped on them," Paul said.

About the only thing that went wrong for the Clippers was Jordan's free-throw shooting. Jordan, who entered hitting 39.9 per cent from the line, was 5 for 17 against Philadelphia. He missed 9 of 12 free-throw attempts in the opening 24 minutes and drew loud boos when he airballed one try.

Other than that, it was a breezy night for the Clippers.

Clippers: The Clippers won their eighth straight against Philadelphia. ... Redick has hit 36 straight foul shots and 68 of 69 since Jan. 5. He didn't go to the line against the 76ers.

Jordan ended his string of 19 consecutive games with at least 14 rebounds when he grabbed 10 boards in the Clippers' 111-80 victory in New York on Wednesday night. He was 7 for 7 from the field in that game, raising his NBA-leading field-goal percentage to 71.3 per cent. That's the highest mark since Philadelphia native Wilt Chamberlain shot 72.7 per cent in 1972-73.

Jordan was 6 for 10 from the field Friday.

Rivers was amazed with Jordan's job on the glass.

Jordan has recorded 20 or more rebounds in 10 games this season.

After tying career-highs with 25 points and six 3-pointers in Philadelphia's 99-85 win at Denver, Robert Covington had two points while missing all four of his 3-point attempts.

Clippers: At Boston on Sunday night.

76ers: At Cleveland on Sunday.