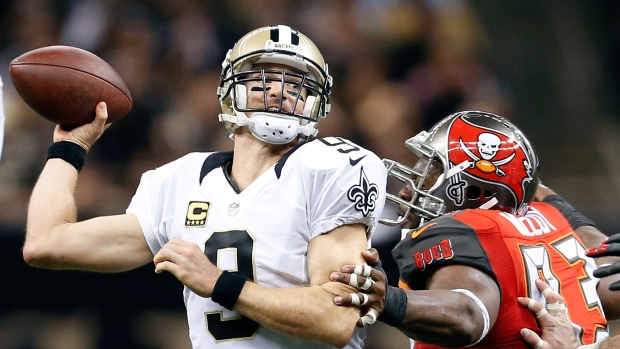 METAIRIE, La. - Drew Brees is expected to return as starter for New Orleans against the Dallas Cowboys on Sunday night in the Superdome, Saints coach Sean Payton said Friday.

"We're planning on starting him, based on the work week," Payton said after practice. "He's thrown well. I thought he looked sharp today."

Brees missed the Saints' 27-22 loss in Carolina last Sunday because of a bruised rotator cuff in his right (throwing) shoulder. The injury occurred on a hit in the second quarter of New Orleans' Week 2 loss to Tampa Bay. Brees never took himself out of that game, but did not appear to perform at his normally high standard, finishing 24 of 38 for 255 yards, a touchdown and an interception.

Brees then did not throw during practice in Week 3, but started taking first-team snaps at practice again this week, saying on Wednesday that he planned to steadily expand the variety of throws he attempted as the week wore on.

"He looks good. He's been throwing it good and having good zip on it," said Saints running back Mark Ingram, a regular passing target out of the backfield in New Orleans' offensive scheme. "He must be feeling good.

"It just says a lot about his character, his overcoming adversity," Ingram added. "He was always very uplifting, very encouraging and confident even when he wasn't playing. ... He was supporting, encouraging us. He's always had his head held up high. You can't tell the difference in him, so that's good."

Brees had said during his weekly media session on Wednesday that felt good about his chances for playing against Dallas, but would need to see how his shoulder responded to his resumption of throwing at practice.

Brees is officially listed as probably on the injury report. If Brees does start as planned, he'll return to a club that is 0-3 and in desperate need of a victory.

But Brees has started all but two since 2006. The only other start he missed was at the end of the 2009 regular season, when he was healthy and New Orleans had already clinched the No. 1 playoff seeding in the NFC.

"Luke was fantastic last week ... but there's a reason that Drew is who he is," said right tackle Zach Strief, one of the Saints' offensive captains. "To have him back especially in a game that obviously is important for us because we can't keep losing, so you want your best guys in the game.

"He does more than anybody in the building to get ready to play, whether that's rehab or film," Strief said. "If he's capable and able, I'm sure he'll be ready to go and I thought he looked good this week."

Notes: Saints cornerback Brandon Browner said he was optimistic about New Orleans' chances of getting a couple of key players back in the secondary. Cornerback Keenan Lewis (hip) and free safety Jairus Byrd (knee) have not played this season, but have practiced on a limited basis this week and both were listed as probable for Sunday on Friday's injury report. "It's exciting, man," Browner said. "You get some of your key players back — they'll help us along this journey for sure." ... Defensive end Cameron Jordan (back), returned to practice on Friday and was listed as probable. Linebacker Dannell Ellerbe (toe), who has not played this season but began practicing on a limited basis last week, also was listed as probable.