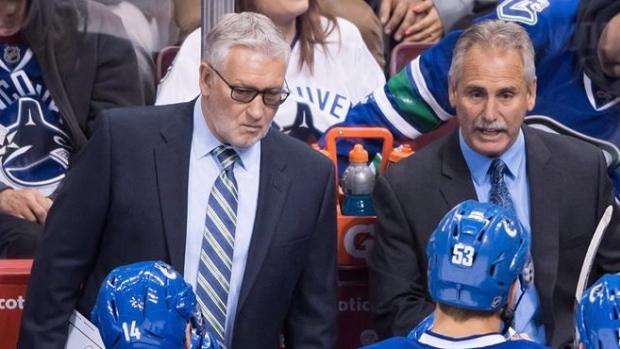 CALGARY — Perry Pearn wanted to take his 21 years of coaching in the NHL to a hockey team that valued his experience.

He found that in the women's game.

Pearn will coach the Canadian women's team at the Four Nations Cup starting Tuesday in Saskatoon.

The hosts open the four-country tournament against Sweden at the SaskTel Centre.

Finland and reigning Olympic and world champion United States round out the field.

Pearn was an assistant coach in the NHL long enough to be on the original Winnipeg Jets coaching staff, as well as that of Jets 2.0.

The 67-year-old from Stettler, Alta, also was an assistant coach of the Ottawa Senators, Montreal Canadiens, New York Rangers and most recently the Vancouver Canucks until 2016-17.

"I was at the stage in my career in the men's game where there didn't seem to be much value in the experience I had," Pearn told The Canadian Press. "Consequently, I felt that experience was way more valued on the women's side."

While Pearn ran the Canucks bench for pre-season games, his last head-coaching gig was with the Western Hockey League's Medicine Hat Tigers in 1994-95.

He also coached Canada to a gold medal at the 1993 world junior men's championship.

"The way my career spun in the NHL, I wound up being an assistant coach," he said. "It didn't seem like if I wanted to stay in that league there was ever going to be the opportunity to be a head coach.

"Certainly that's part of it too is having the opportunity to be a head coach again and in some ways prove to myself that the things I did when I was a head coach weren't a fluke. They were built on some pretty sound principles."

Pearn hadn't worked with a women's team prior to doing some scouting for the 2018 Canadian Olympic team.

He was added to the coaching staff as an assistant days before the Winter Games to be the team's "eye in the sky" in Pyeongchang, South Korea.

Coaches with NHL experience have been through the national women's program before, most notably Kevin Dineen when, after he was fired as head coach of the Florida Panthers, parachuted in to coach Canada to gold at the 2014 Winter Olympics.

Former NHL defenceman Doug Lidster was Canada's assistant coach at the 2010 Winter Games. He coincidentally served as a Canucks assistant coach to Willie Desjardins alongside Pearn from 2014 to 2017.

Since those men have had job opportunities that Canada's female coaches don't currently, the question is how long they'll be with national women's team before returning to the men's pro game.

"I would probably be willing to make a commitment to the next Olympic Games," Pearn said. "We haven't got to that stage with Hockey Canada. The decision was made that we would approach it a year at a time.

"If you look around the National Hockey League now, the average age of the coaching staffs have gone way down. There doesn't seem to be a lot of value on experience in the NHL. That could always change, but right now I'm not looking at this as a stepping stone to getting back in the NHL."

While Pearn brings a loaded coaching resume from the men's side, Hockey Canada's new director of women's national program said winning was top of mind with her first head-coaching hire.

Gina Kingsbury believes Pearn can return the country to the top of international women's hockey podium and can help the players and coaches he works with improve, whether his tenure is long or short.

"I do think it's a huge value for us to take that risk and get the most out of him as we possibly can in hopes of potentially keeping him for a little longer," Kingsbury said.

The U.S. has beaten Canada in the final of the last four world championships and last three Four Nations, as well as prevailing in a shootout in the 2018 Olympic final.

"Winning is important. It really is," Kingsbury said. "When it comes down to the first Four Nations of a new quad, to me about it's getting back to a winning culture.

"The sooner we get back there, I think the better we will be."