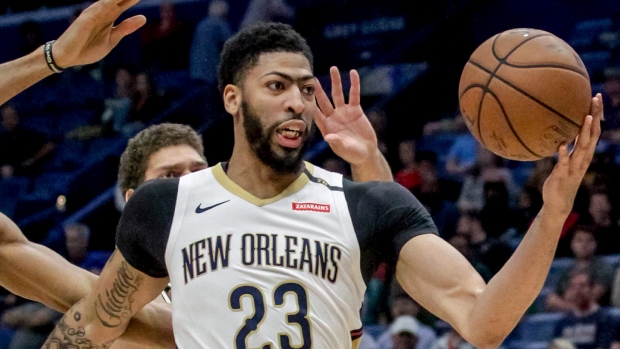 "I'm open-minded," Griffin said while introducing new front office hire Swin Cash on a conference call with reporters. "If things devolve in such a way that it's time for us to make a decision relative to Anthony Davis or any other part of the organization, we will. But we're not in a hurry to do anything and we don't feel there is a time sensitivity to anything that we're talking about — and that includes AD's desire to stay or not stay. That's not something there's a shot clock on."

The Pelicans have the first overall pick in the June 20 NBA draft, when they are expected to select consensus top prospect Zion Williamson of Duke. The Pelicans could acquire additional high draft picks by dealing Davis by draft night, but also could choose to wait and trade Davis for established NBA talent.

When Griffin was hired in April as Pelicans Executive Vice-President of Basketball Operations, he expressed interest in persuading Davis to reconsider his trade request. But Davis has yet to indicate a change of heart, raising prospects for a blockbuster deal that could involve multiple teams.

While Davis may not be on board with Griffin's vision for the Pelicans, Cash said she is convinced Griffin is creating a team culture that promotes winning and even career advancement for herself.

"The reason why I made the commitment to come here is because I see some really positive things happening," said Cash, whose formal title will be vice-president of basketball operations and team development. "And what I know — basketball-wise — is culture. What I know is people, and that's what attracted me here to New Orleans. So I can't speak about things in the past, but what I can speak about is what's being built right now.

"If I'm going to go anywhere and uproot my family and go all in on the ground floor, you want to have somebody that is not only inspiring you, but also someone that tells you that you have an opportunity to grow in this business."

Griffin has said he only accepted the Pelicans top basketball operations job after Gayle Benson, who owns both the Pelicans and NFL's New Orleans Saints, agreed to invest in building up and restructuring her basketball club's front office.

Cash, a former Connecticut, Team USA and WNBA star, is the third top-level executive hired by Griffin in the past two months.

Before that, Griffin hired Suns executive Aaron Nelson away from Phoenix to oversee player health and lured Brooklyn assistant GM Trajan Langdon to New Orleans with the title of general manager after Langdon helped the Nets reach the playoffs this season.

Cash and Griffin worked together previously at TNT covering the NBA as analysts after Griffin had left his previous NBA front office post as Cleveland GM.

Griffin noted that as an analyst, Cash "was always watching from the standpoint of talent evaluation and player development. So, her thoughts on players and what players could potentially be and how you get them there had a great deal to do with my thought process about what she would potentially be able to offer a franchise."