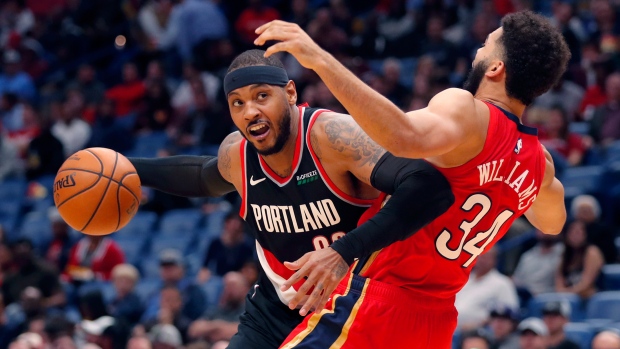 NEW ORLEANS — Carmelo Anthony smiled easily in a hallway outside the Trail Blazers’ locker room and asserted that he “felt great” after the first game of his 17th NBA season, even if his new team couldn’t keep pace with Jrue Holiday, Brandon Ingram and a largely revamped Pelicans squad that is showing signs of figuring some things out.

“It felt great just to be back into the flow of the game, be back on the court, be back to where I think I belong,” Anthony said. “As far as conditioning, though, I felt absolutely great out there. There was minor things, but it was more of the flow of things, and getting used to how the team plays and sets and getting used to the guys on the team.”

Holiday had 22 points and 10 assists, Ingram added 21 points in his return from a four-game absence, and New Orleans beat Portland 115-104 on Tuesday night for its second straight victory and third in four games.

Anthony finished with 10 points while Portland leading scorer and four-time All-Star Damian Lillard missed his first game of the season with back spasms.

Starting at forward and playing across the street from where he led Syracuse to the 2003 NCAA championship over Kansas, Anthony scored the Blazers’ first points of the game on a 3-pointer from 26 feet out. Anthony missed 10 of 14 shots, but also hadn’t even participated in a full practice, having joined the team the day after its loss in Houston on Monday night.

“For having (only) a morning shootaround, I thought he was pretty good,” Blazers coach Terry Stotts said. “I thought every shot he had, he was getting a good look at the basket.”

Ingram looked spry in his return from right knee soreness, particularly on an authoritative, driving, one-handed dunk that got the crowd roaring in the opening quarter.

“I think trying to get to my spots and assert myself a little bit and getting other players involved, I think I did an OK job,” Ingram said. “I felt pretty good today. I didn’t have any restrictions.”

New Orleans seized momentum in the third quarter, going up by 13 on a sequence that began when Nicolo Melli hit a 3 and then got the ball right back in a largely vacated Portland back court after Nickeil Alexander-Walker dove to swipe the ball away from McCollum. Melli went straight in for a dunk that made it 83-70.

Pelicans: Melli finished with 14 points and E’Twaun Moore added 11 points off the bench. ... Guard Frank Jackson returned after missing one game with a neck bruise and scored nine points. ... Guard Lonzo Ball (groin), centre Derrick Favours (back) and guard Josh Hart (ankle) were among the injured for New Orleans.

Holiday highlighted his night with a spinning dribble around Little for a driving dunk.

“I’m not really trying to dunk. That takes a lot of energy out of you,” Holiday said, adding that it was really the way Little pursued him that spurred him to finish strong. “I just felt him coming and at that point I wasn’t trying to get my shot blocked.”

In the second half, Holiday scored on an unusual play in which he remained under his own basket, re-tying his shoes while his team advanced 4-on-5 into the offensive end. Holiday then came sprinting down court, took a handoff from Melli near the 3-point line and exploded toward the rim for a layup.

But when Anthony tried to rise for a two-handed dunk in the first half, he was met with resistance by a member of the NBA’s rookie class when eighth overall draft pick Jaxson Hayes rejected the attempt in what was his second of three blocks.

“I thought he was going to try to lay it up,” Hayes said. “It just shows his passion for the game still. He’s still trying to go dunk on people. ... Blocking it was pretty fun.”

Trail Blazers: Visit Milwaukee on Thursday in the third game of a six-game road trip that began last Saturday and ends Monday night.