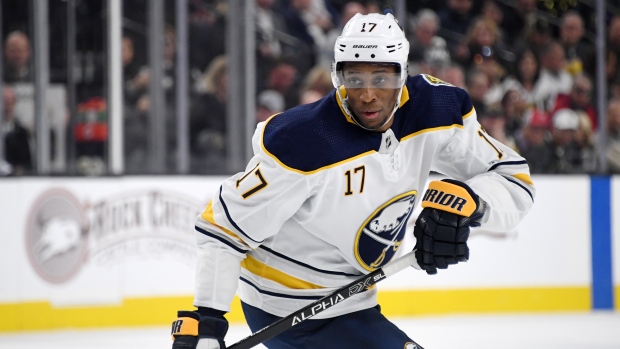 Set to hit unrestricted free agency next month, veteran forward Wayne Simmonds says he’s 100 per cent healthy and looking to join a contender to push for a Stanley Cup.

“My whole career, I think I’ve been that guy who is willing to do all the dirty work. I pride myself on doing that type of dirty work,” Simmonds told TSN Hockey Insider Pierre LeBrun in The Athletic. “I think now I’m in a position as being a free agent again where hopefully I can land myself on a contending team. That’s the goal here. I want to be a difference-maker, I want to be a piece to a puzzle that’s not yet complete, but I can help push over the top.’’

Simmonds was acquired by the Buffalo Sabres ahead of the trade deadline this season from the New Jersey Devils. He posted one assist in seven games with the Sabres before play was halted in March, finishing the season with eight goals and 25 points in 62 games between the two teams.

The 32-year-old Scarborough, Ont., native was asked about the possibility of joining his hometown Toronto Maple Leafs, telling LeBrun he believes he could help the team with his playing style.

“So, of course it’s crossed my mind. I know they’re in a bit of a salary cap situation and things of that nature, but you know I’m open to everything, Toronto’s got a great core of players and I think that’s definitely a team where I could go in and make an impact right away," Simmonds said. "It’s up to the teams. Whoever wants to choose me, I’ll be waiting. I’ll definitely be ready to go.’’

Chatted with Wayne Simmonds about the uncertainty of the UFA market. Would he be a good fit in Toronto? That, plus a look at the five head coaches entering the last year of their contracts: https://t.co/L4BpR2pkzy

LeBrun adds that the Sabres have not yet closed the door on re-signing Simmonds after his brief stint with the team.

A veteran of 909 NHL games, Simmonds signed a one-year, $5 million contract with the Devils last summer. He has 251 goals and 499 points over his 12-year career.