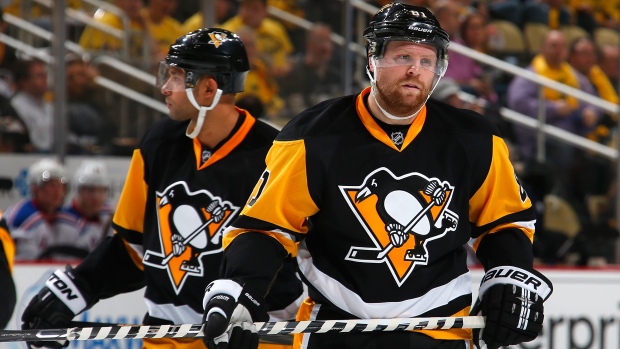 For years under prior management groups, the Pittsburgh Penguins consistently looked the part of a top-heavy pretender.

Sure, they battled some really ugly injury runs. But more troubling than their inability to keep guys in the lineup was their struggle to build anything lasting to support a generational talent in Sidney Crosby (and a second in Evgeni Malkin, for that matter).

Their top-end talent was always good enough to get the team into the playoffs. Beyond that, there were always question marks. Could the depth forward groups - beaten up against weaker competition all season long - ever hold up against the other powers of the Eastern Conference? Time and time again, the answer was no.

That changed considerably this season under first-year head coach Mike Sullivan. He embraced the individual talents assembled by the front office and found creative ways to put the pieces together.

That’s a point worth focusing on, especially with Pittsburgh now having disposed of both New York and Washington. There’s a tendency in the hockey media to bestow all of the glory and affection on the marquee players when a team piles up big victories.

But in Pittsburgh, the sea of change is really being driven by what’s behind Crosby. He’s always gotten the better of his opponents. Now, his teammates are doing the same.

One of the ways you can tease this out is by looking at how Pittsburgh has performed both with and without Crosby over the years. As you might expect, those dark years following their Stanley Cup win were driven by bad teammates submarining team output. The ship has since been righted, and, suddenly, Pittsburgh can’t lose.

We’ll look at two key performance metrics - one that captures territorial advantage (Corsi%), and one that captures both shot volume and shot quality (Expected Goal%). Here are the numbers over the last five seasons for the Penguins both with and without their captain:

You can mirror year-by-year for both of our measurements, but they tell the same story: Pittsburgh was getting bagged whenever their stars were taking a breather on the bench. It forced Crosby (and Malkin, and Kris Letang) to shoulder a significant portion of the scoring and defensive burden. The talent gaps created obvious issues, and Pittsburgh struggled when deeper teams could trade blows.

But, as we get toward the 2015-16 season, we see a noticeable swing. Crosby, et al. are still crushing things, but the bottom of the lineup has demonstrably stepped forward. Just look at the deltas for Corsi% and Expected Goal% over the same interval and you’ll see the same exact thing:

You are reading that correctly: 2015-16 was the first season in which the Pittsburgh Penguins were actually better from an Expected Goal% standpoint with Crosby off of the ice. Considering that we expected Crosby and company to score about 55 per cent of the goals at 5-on-5, that’s nothing but an absolute compliment for the depth assembled in Pittsburgh. (The Corsi% differentials didn’t swing completely, but Pittsburgh was only about 2.5 percentage points better with Crosby on versus off – a far cry from where we were just a couple of years ago.)

There are a multitude of reasons for the change in Pittsburgh, not the least of which (after the coaching change) is the armament of secondary talent assembled by the front office in the last couple of years. The newfound Phil Kessel – Nick Bonino – Carl Hagelin line has been nothing short of brilliant this postseason, with 30 points compiled through the first two rounds. It’s worth reiterating that this line only existed in dreams one year ago too. Kessel was the big summer trade acquisition, Bonino the ‘other’ big summer acquisition, Hagelin was a buy-low-and-watch-him-blow candidate at the trade deadline.

The talent injection is precisely what Pittsburgh needed to get serious about contending for a Stanley Cup again. For a few years, they tried to get by with a couple of world-beaters and a handful of prayers. It failed miserably.

But look at where the Penguins are today. After a coaching overhaul, major structural changes and savvy identification/acquisition of external player talent, the team sits just eight wins away from the Stanley Cup.