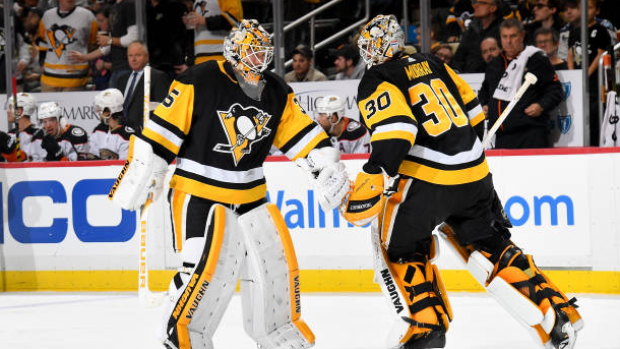 With the NHL salary cap not expected to rise for the 2020-21 season, Pittsburgh Penguins general manager Jim Rutherford admitted Tuesday that his team will be facing a cap crunch this off-season.

Goaltenders Matt Murray and Tristan Jarry are both scheduled for restricted free agency and Rutherford told The Athletic that, while there is a way to keep both goaltenders, manoeuvring to stay under the salary cap will prove difficult.

“Well, I’ll say this: If we are going to keep both of them, we’d have to move a few things around on our team," Rutherford said. "There is a way to do things and to make that work, yes. There are some very, very tough decisions ahead.”

Murray will turn 26 this month, while Jarry turned 25 on April 29. The Penguins also have goaltender Casey DeSmith, who started 14 games last season, under contract through 2021-22.

Pittsburgh currently has $67.28 million committed towards next season's salary cap with 15 players under contract, per CapFriendly.