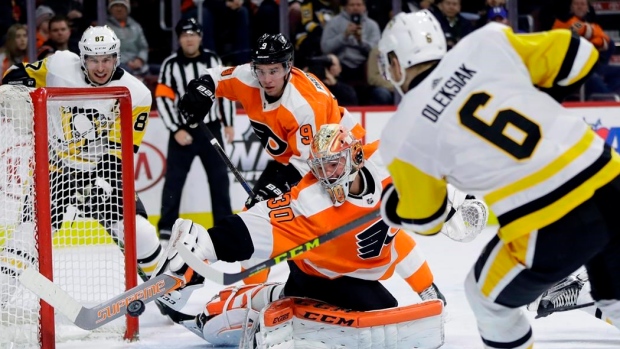 There's no need to push the panic button in Pittsburgh yet.

There are plenty of examples of a reigning Stanley Cup champion not making the following season's playoffs, most recently the Los Angeles Kings in 2015. But one would need to go all the way back to 1970 to find when a back-to-back champion didn't even qualify for the post-season — when Montreal achieved that dubious feat.

That's what Pittsburgh is trying to avoid.

The Penguins aren't in trouble yet, though aren't exactly on the thickest of ice either. They haven't as much as won back-to-back games in a month, and are basically in the middle of the pack in goal-scoring — after leading the league last season.

If the season was over now, they wouldn't be in the playoffs. But there's a ton of hockey left, and the Penguins know there's lots of time to make a run.

"We need to find that second gear," Penguins left wing Conor Sheary said recently. "It's coming into the second half of the season here. We have to make sure we're stringing some wins together and maybe get on a win streak here."

Sheary did his part Tuesday night, scoring in Pittsburgh's 5-1 win over Philadelphia.

Pittsburgh has the longest active streak of playoff appearances, having been to the post-season 11 consecutive times.

Winnipeg's Patrick Laine is still only 19, and has a chance to join a seriously elite club.

He has 54 career goals, which means he's on the cusp of joining the 10 highest-scoring teens in NHL history. Steven Stamkos had 55 goals before he turned 20.

For comparison's sake, Jaromir Jagr had 50 NHL goals on his resume when he turned 20.

Speaking of the Jets, they piled up 102 standings points in the 2017 calendar year — by far their best "year" since relocating to Winnipeg in 2011. Only seven NHL teams had more points from Jan. 1 through Dec. 31.

Washington's Alex Ovechkin has a league-best three hat tricks already this season — and there's still a full half of the schedule yet to be played.

It doesn't sound like much, but Ovechkin is on quite a pace.

No NHL player has had four in a season since 2010-11 — done then by Alexander Semin and Drew Stafford.

The record for hat tricks in a season is 10, by Wayne Gretzky (who did it twice).

Florida saved its playoff hopes with a five-game winning streak to end December.

January is rarely kind to the Panthers, however.

Since 2011, the Panthers have won only 35 of their last 81 January games — including a 5-1 loss at Minnesota on Tuesday to start a five-game trip. Florida didn't exactly look desperate in that game either, with forward Vincent Trocheck saying afterward the Panthers got outworked by the Wild.

While those numbers have stayed the same, his scoring numbers are way better. He's averaging about three-quarters of a point per game, as opposed to a half-point per game last season. He's had four gamewinning goals already, compared to just one last season. And he is a plus-20 this season (entering Tuesday), after posting a plus-8 for the entirety of last season.

Vegas at Chicago, Friday: The second night of a back-to-back on the road for the Golden Knights, and the second game in a stretch where Vegas plays 12 of 16 on the road. If Gerard Gallant's club — the NHL's best story this season — survives the next month relatively unscathed, there should be playoff games around J-Lo shows in Vegas this April.