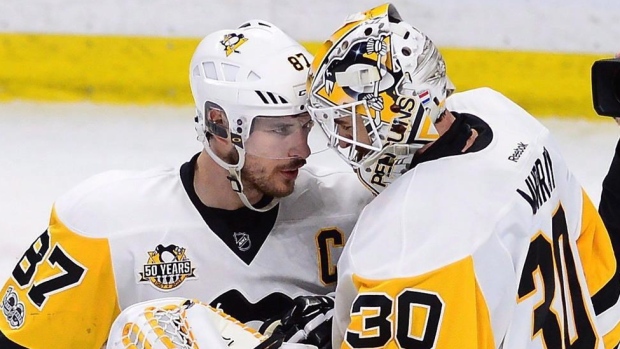 Antti Niemi’s run as Matt Murray's backup for the Pittsburgh Penguins came to an end Monday after an 0-3 start to the season with 16 goals allowed.

Niemi was claimed by the Florida Panthers on Tuesday and the Penguins will now move forward with Casey DeSmith serving as Matt Murray's backup.

“This is a situation that we’ll watch on a week-to-week basis, really,” Rutherford told the Pittsburgh Post-Gazette. “But Casey, he’s played very well. The plan was to let these guys develop, give [Tristan] Jarry more time to develop. That was part of signing Antti.

“Unfortunately, [Niemi] just drew the bad hand for three games. He had the back-to-back games and we didn’t do a lot to help him, so I feel bad for him. But we’ve accelerated that [plan] now, and we’ll just see how this situation plays out on a week-to-week basis.”

Murray took over the starting goaltender role for the Penguins in the 2016 playoffs from Marc-Andre Fleury. The team employed the tandem last season before leaving Fleury exposed in the June expansion draft, where he was selected by the Vegas Golden Knights.

DeSmith, 26, posted a 3-0 to start the season with the AHL's Wilkes-Barre/Scranton Penguins, owning a .965 save percentage and one shutout.

The Penguins have yet to lose in regulation with Murray (5-0-1) in net this season and, despite their struggles without him, Rutherford says he's not in a rush to add a backup on the trade market.

“We’ll just see how this situation is,” Rutherford said. “We’re not in a situation now where we have to move that quick. We’re early in the year. If we get to a point where we have to change course or move quickly, then like anything, we’ll look at all options.”