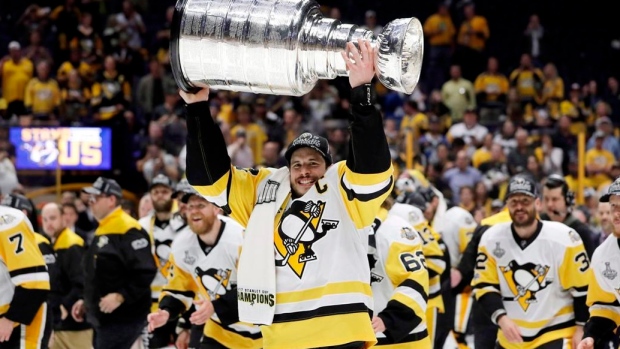 The Pittsburgh Penguins’ bid to become just the third team in more than half a century to three-peat begins with them sharing top billing in the 7-Eleven Power Rankings alongside Tampa Bay.

Pittsburgh and Tampa Bay enter the 2017-18 season as the NHL’s most powerful teams according to the TSN Power Ranking panel of Ray Ferraro, Jeff O'Neill, Jamie McLennan, Craig Button and Darren Dreger.

Two-time defending champion Pittsburgh retains its position at No. 1, while Tampa Bay rises all the way from No. 17 in the final 2016-17 power ranking.

Rounding out the top grouping in the first instalment of weekly rankings are No. 3 Edmonton, No. 4 Chicago – climbing from No. 15 – and No. 5 Washington.

A number of veterans (Marc-Andre Fleury, Matt Cullen, Mark Streit to name a few) are gone, but consecutive Stanley Cups prove the Penguins have the ability to plug any holes in their lineup.

Drouin will be difficult to replace, but the return of Steven Stamkos (after playing just 17 games last season) and Nikita Kucherov’s scoring touch, plus Dan Girardi and Chris Kunitz, will pay dividends.

Connor McDavid and Leon Draisaitl, along with the stellar netminding of Cam Talbot, rookie Kailer Yamamoto, new addition Jussi Jokinen and a trimmer Milan Lucic, should carry them deep in 2018.

Same old deal, it’s Kane, Toews, Keith and Seabrook and then fill in the blanks. The return of Brandon Saad and the addition of blueliner Connor Murphy will be key for them to get past Round 1.

One of the league’s strongest cores is still intact - Ovechkin, Kuznetsov, Backstrom, Carlson and Holtby - but two straight Presidents’ Trophy wins mean nothing if you can’t at least reach the East final.

Losing four regular forwards means adding more youth into the lineup of a team that is coming off the best regular season in franchise history, but has yet to won a playoff series. Artemi Panarin will help.

The Ducks return most of the same team that nearly reached the Stanley Cup Final, but must tough out the start of the season minus injured Ryan Kesler, Sami Vatanen and Hampus Lindholm.

One of the most improved teams in the league with a new coach (Ken Hitchcock), new goalie (Ben Bishop), new defence (led by Marc Methot) and new winger (Alexander Radulov).

The kids (Auston Matthews, Mitch Marner, William Nylander) get some old age security in Patrick Marleau and will need to rely on Frederik Andersen to be effective playing at least 50 games.

Mike Smith is the latest candidate in the annual search for a reliable No. 1 goalie, and the late signing of Jaromir Jagr as well as the addition of blueliner Travis Hamonic should help out in Calgary.

Few changes for the team that went to double OT in Game 7 of the Eastern Conference Final. The key will be keeping Erik Karlsson in the lineup and healthy after his off-season ankle surgery.

Coming off the best season in franchise history, but can head coach Bruce Boudreau get them past the first round of the playoffs with newcomers Tyler Ennis, Marcus Foligno and Matt Cullen in the lineup?

Goal scoring is not a problem with Patrik Laine and Mark Scheifele on board. Will inconsistent Steve Mason be an upgrade over inconsistent goaltending that has hurt Paul Maurice the last three years?

After 11 years as the No. 1 goalie and 295 wins, Cam Ward is backup and Scott Darling takes over for a rising team. The returning Justin Williams in the lineup leads a talented young defensive corps.

Very little has changed in Boston with the re-signing of scoring machine David Pastrnak, except that they will have 2016-17 Calder Trophy candidate Charlie McAvoy for the entire season.

A strong, mobile blueline gets stronger with the addition of Kevin Shattenkirk, but aging goalie Henrik Lundqvist really needs to rebound from a disappointing season.

With Anze Kopitar, Jeff Carter and Drew Doughty on the roster, it’s up to new coach John Stevens to return this team to the recent glory of two Stanley Cups in the last six seasons.

The loss of Robby Fabbri for the season is a big blow, but the Blues may have filled their need for a No. 1 centre with the addition of Brayden Schenn. However, making the playoffs won’t be easy.

Little change in their lineup means little change likely in their fortunes, but it will be up to the two Joes - Thornton and Pavelski - and Norris winner Brent Burns to have any hope beyond Game No. 82.

The Panthers, with new coach Bob Boughner, must have a lot of confidence in largely the same roster if they allow 30-goal man Jonathan Marchessault to go to Vegas. Could still challenge for a playoff spot.

Not much else matters this season until one thing happens: Getting John Tavares signed. The acquisition of Jordan Eberle and his soft hands should help Tavares have a shot at a 30-goal season.

It seems as though the Flyers are always searching for a reliable No.1 goalie – so is Brian Elliott the answer? No. 2 overall draft pick Nolan Patrick will have to fend off injuries to help this team contend.

The new management team led by Jason Botterill and coach Phil Housley will try to turn around a franchise that hasn’t made the playoffs in six years - can Jack Eichel be the difference this season?

No. 1 pick Nico Hischier should spark some life into the Eastern Conference’s last-place team, and Marcus Johansson will also help, but Cory Schneider needs to bounce back from a bad season.

After missing the playoffs for the first time in 26 years, the Red Wings have made few changes, almost ensuring it will be the second time in 27 years. It’s time to replenish this roster with a Top 5 pick.

The Sedins are 37 and the best addition to the Canucks roster (with Travis Green now behind the bench) is prospect Brock Boeser, so other than that there’s not much to really get excited about.

With few changes in their lineup, the Avs need to make up 19 points - and that’s just to be tied for the second-worst record. Matt Duchene is also in limbo, so Nathan MacKinnon will need to return to form.

Have the potential to be a competitive team in their first NHL season thanks to GM George McPhee landing Marc-Andre Fleury, James Neal and an overall good mix of veterans and young talent.