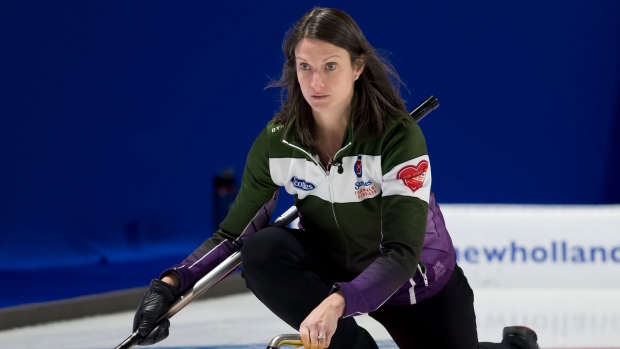 MOOSE JAW, Sask. — Suzanne Birt reached the championship round at the Scotties Tournament of Hearts a second straight year with higher ambitions.

The Prince Edward Island skip upped her workload on and off the ice to be ready for battle against some of the world's best teams.

Tiebreaker games Thursday morning will determine the two teams that join them.

Birt's taste of the championship round in last year's Hearts in Sydney, N.S., had Birt believing her team could achieve more if it did more.

She finished outside the Page playoff at 6-5. Birt lost in an extra end to Homan in the championship round.

"We realized how close we were at the very end of the Scotties," Birt said Wednesday. "You put a little extra work into it and anything can happen."

Her team worked with a physical trainer, a sports psychologist and enlisted the expertise of current Manitoba men's champion Jason Gunnlaugson for analytics and strategy.

"Experience is a big thing, but a lot of hard work throughout the year is probably the most important thing," the 38-year-old Birt said.

"You've got to work on every aspect of your game, strategy, technical, mental, analytics. It's all a huge part of the game. We've worked very hard at that this year."

The top four teams in each pool of eight carry their records with them into the championship round starting Thursday afternoon.

Manitoba (6-1) finished first in Pool A ahead of Northern Ontario (5-2). Carey's Team Canada, Saskatchewan's Robyn Silvernagle and New Brunswick's Andrea Crawford were all (4-3).

The three-loss teams were 1-1 against each other in the round robin.

Carey earned the third seed by virtue of the draw-the-button competition that preceded the opening draw of the tournament.

Saskatchewan and New Brunswick will square off in a tiebreaker to determine the fourth seed in the pool.

Six-time Canadian champion Jones and three-time champ Homan topped Pool B at 6-1 ahead of Birt at 5-2.

Teams in the championship round play four games against opponents from the other pool.

The four rinks with the best records advance to Saturday's Page playoff. The semifinal and final are Sunday.

A 22-year-old Birt — then Suzanne Gaudet — made a stunning Hearts debut in 2003. She topped the preliminary round at 10-1 and finished third in the tournament.

Birt has yet to match her rookie success skipping P.E.I. an 11th time.

The two-time Canadian and former world junior champion was the fourth seed in the 2007 playoffs in Lethbridge, Alta., and lost out to Jones.

Ranked No. 9 among women's teams in Canada compared to 25th a year ago, Birt opened the season reaching the quarterfinals of the Stu Sells Oakville Tankard in Ontario.

Birt finished top three in six of seven Atlantic Canada events the first half of the season.

"The more times you do something, like the 10,000-hour rule, that's exactly what we needed to do this year is just get the reps in and make mistakes and learn from them," second Meaghan Hughes said.

"We played a ton of games this season and did a lot of things differently.

"We worked with a strategy coach, we work with a trainer, we worked with a sports psychologist. We tried to look at all the different facets of our game and make sure we're covering those off."

Hughes is among the pregnant curlers at this year's Hearts. She's due this summer as is the Saskatchewan front end of Jessie Hunkin and Kara Thevenot.

Hughes says P.E.I. is going into the championship round under the radar.