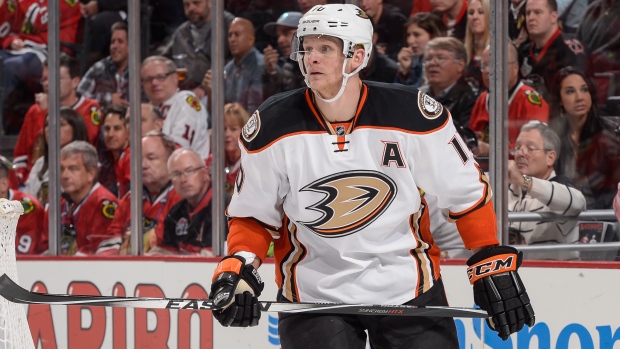 A day after being eliminated from the Stanley Cup Playoffs, Anaheim Ducks forward Corey Perry has confirmed that he will play for Canada at the World Championship.

"Fans know these three players well for their success in the NHL, but it's important to remember all three also bring international experience that will serve our team well as we begin our quest to defend gold," said Canadian head coach Bill Peters.

TSN Hockey Insider Darren Dreger says that Canada would still like to add another defenceman and possibly a goalie to the roster.

The 30-year-old from Peterborough, Ont. had 34 goals and 28 assists in 82 games for the Ducks this season. He had four assists in the seven-game playoff loss to the Nashville Predators.

This will be Perry's third appearance at the World Championship for Canada. He played in 2010 and 2012 and totalled five goals and five assists in 15 games. He also played for his country at the 2014 Sochi Olympics.

Brassard, 28, had 27 goals and 31 assists in 80 games for the Rangers and will be making his first appearance for Team Canada at the senior level.

Dumba, 21, had 10 goals and 16 assists in 81 games for the Wild and will also be playing at his first Worlds. He played for Canada at the 2014 World Juniors.