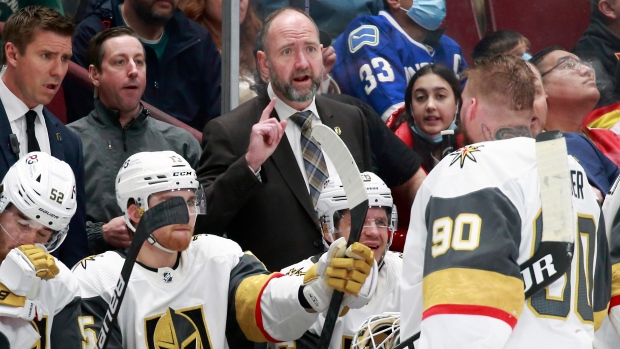 The Dallas Stars announced Tuesday that Peter DeBoer has officially been named the team's 25th head coach in franchise history.

TSN Hockey Insider Pierre LeBrun reports the deal with the 54-year-old is for four years and worth $4.25 million per season.

DeBoer has signed a four-year deal worth $4.25 million per season https://t.co/2vbMFNW26L

DeBoer was fired by the Vegas Golden Knights last month after the team failed to make the playoffs for the first time in franchise history, finishing with a 43-31-8 record.

DeBoer has coached 1,015 NHL games and has a 513-379-123 record split between the Florida Panthers, New Jersey Devils, San Jose Sharks and Golden Knights. He also coached the Ontario Hockey League’s Kitchener Rangers to a Memorial Cup championship in 2003.

Rick Bowness stepped down as head coach of the Stars in May shortly after the team lost in Game 7 of their first-round series against the Calgary Flames. Dallas finished the regular season with a 46-30-6 record, returning the playoffs after missing the postseason in 2021, one year after reaching the 2020 Stanley Cup Final.

“Pete brings a wealth of experience to our dressing room, and we’re thrilled to name him our next head coach,” Stars general manager Jim Nill said. “Every team that he has taken over has not only shown immediate improvement but has been ultra-competitive in the Stanley Cup playoffs. ... His resume displays the high standards he sets and his ability to get his team to play up to that level consistently."