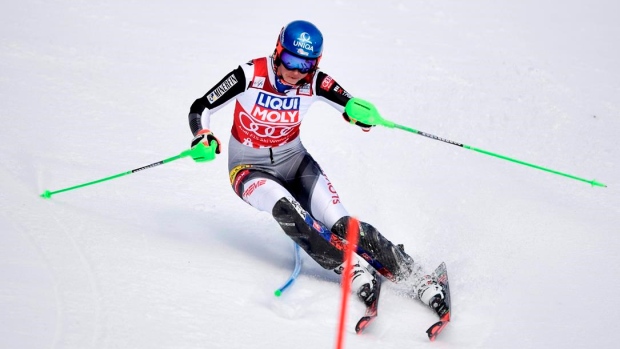 ÅRE, Sweden — Petra Vlhova is back on course to become the first Slovakian to win skiing’s overall World Cup title.

Vlhova defended her first-run advantage in a slalom to claim her 20th career victory on Friday. She moved 64 points ahead of Swiss rival Lara Gut-Behrami — who does not race slaloms — in the overall standings.

Vlhova finished 0.20 seconds ahead of recently crowned world champion Katharina Liensberger and 0.64 ahead of Mikaela Shiffrin.

Vlhova held her arms out wide and spun around in the finish area to celebrate.

She led the overall for almost the entire season until Gut-Behrami's recent success in speed events pushed her ahead.

“Of course I feel pressure but I know how to manage this pressure,” Vlhova said. "Every race is a lesson for me. ... I’m trying to be perfect.”

Shiffrin, who stood second after the opening run, pulled off a major recovery after a big mistake in her second trip down.

Jeff Lackie, Shiffrin’s coach, set the second run, but that didn’t help the American when she lost control on the upper portion of the course.

“Even though there was a mistake I was still pushing a lot. It was still good skiing,” Shiffrin said.

“I’m more proud of this third than I am of some of the wins I’ve had in my career, because I felt like I earned it and I fought for it. You have to fight to the finish and I felt like I did that,” Shiffrin added.

The race was held under lights at dusk.

Vlhova also added to her lead in the slalom standings, where she's up on Shiffrin by 85 points and Liensberger by 90 points.

Another slalom is scheduled for Saturday in Åre. Then the finals start in Lenzerheide, Switzerland, on Wednesday.