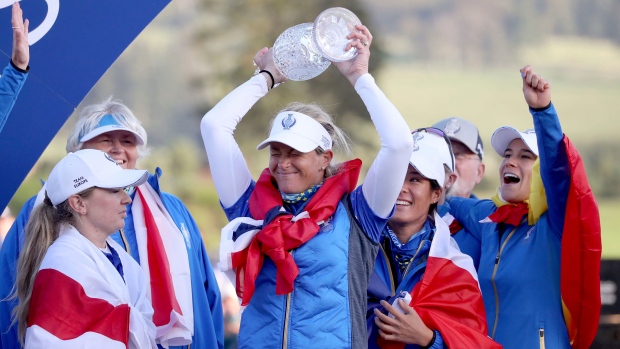 In movies, books and plays, the ending is usually perfect. Boy and girl fall in love, the right side wins the war or the dog returns home after a long adventure.

On a few occasions, it happens in sports. Ray Bourque won the Stanley Cup and retired. John Elway won the 1999 Super Bowl and ended things. Carlos Beltran captured the World Series and then called it a day.

In golf, there aren’t too many perfect endings. Great tournaments, great years, but not many players have had walk-offs to careers. Most stay around long after their due date has passed.

That’s what makes Suzann Pettersen's final act so brilliant, so perfect. On Sunday, she sank a seven-foot putt that clinched the Solheim Cup for the European side and then promptly announced her retirement.

Talk about dropping the mic, or the putter.

The Norwegian golfer had a stellar career, winning 15 times on the LPGA Tour including the Canadian Women’s Open and the now-defunct Manulife Classic. But on Sunday, after the final-putt dramatics, she said that was enough.

“Yeah, this is it,” Pettersen told reporters. “I’m completely done.

“I’m closing it down tomorrow, what more can I say. I’m done.”

With her teammates around her, she figuratively threw her clubs in the trunk and drove off into the sunset.

Pettersen was a controversial captain’s pick by European leader Catriona Matthew. She was coming back from a 19-month absence from maternity leave and injury, and played only three times before being put on the team.

But Matthew believed she could draw out the gritty performances Pettersen had given in her past eight appearances at the Solheim, that she would rise to the occasion. And also that she would provide a calming foundation to the rest of the squad. The Norwegian split her two matches before Sunday’s singles, but off the course, she was the squadron leader, firing up here teammates when needed and also calming them at times when the intensity grew too hot.

Pettersen’s final-hole dramatics closed out a relentless rally for the European side, which, late on Sunday, found itself down 13.5 to 11.5 with just three matches left on the course. Then the stars began to align. Anna Nordqvist handled Morgan Pressel, 4 and 3, and Bronte Law defeated Ally McDonald 2 and 1.

That set up the dramatic final putt for Pettersen.

Ever the complete competitor, Pettersen punched both fists in the air, then immediately turned to opponent Marina Alex and hugged her before being swarmed by her teammates.

Pettersen bows out after a stellar career that included wins in two major championships. She also made a name for herself by posing in the buff in the ESPN Body Issue in 2012.

The 38-year-old will take on a new career, that as a full-time mother. She gave birth to a son in August 2018. Baby Herman was in attendance for the dramatic finish at Gleneagles in Scotland, and will no doubt be told about the day when he’s old enough to understand just what his mother accomplished.