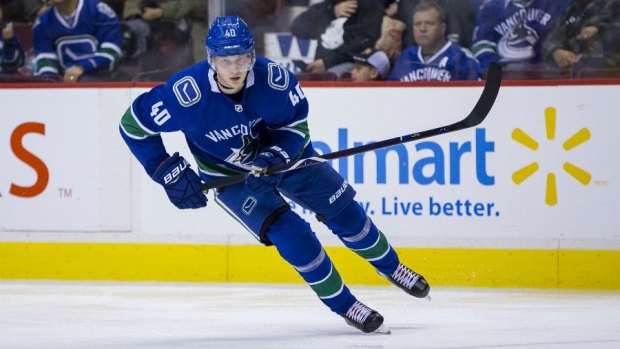 The Vancouver Canucks say rookie forward Elias Pettersson is in concussion protocol while centre Jay Beagle is out six weeks with a broken forearm.

Pettersson was injured when he was taken hard into the end boards and slammed to the ice by Florida defenceman Mike Matheson in the third period of Vancouver's 3-2 win Saturday. There was no penalty on the play.

The 19-year-old Swedish centre appeared woozy afterwards and needed assistance to get to the locker-room. He did not return to the game. After the game, Canucks head coach Travis Green called the hit "a dirty play."

Matheson was scheduled to have a hearing with the NHL's Department of Player Safety on Monday.

Beagle was injured in the same game after blocking a shot.

The loss of Pettersson for any significant length of time will be a blow to the rebuilding Canucks. The rising star has five goals and three assists in five games this season after being selected fifth overall by the Canucks in last year's NHL draft.

Beagle, a veteran centre, signed a four-year contract worth an average US$3 million per year with the Canucks on July 1. He helped the Washington Capitals win their first Stanley Cup last season.