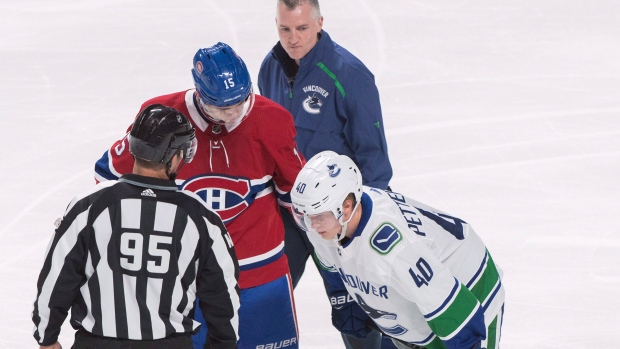 Head coach Travis Green didn't provide an update post-game, but said that the recently named all-star will stay with the team when they head to Toronto to face the Maple Leafs on Saturday.

The 20-year-old Swedish forward appeared to twist his right leg as he fell awkwardly to the ice after getting entangled with Montreal forward Jesperi Kotkaniemi early in the second period.

"I hate seeing him get hurt. You first emotion is you're pissed off, and you're wondering if it's a dirty play, and that's running through the bench's mind. But it wasn't. I expect he won't play Saturday, but I don't think it'll be too long," Green said.

Pettersson was able to skate off the ice under his own power, but soon after heading to the locker-room the Canucks confirmed he would not be returning to the game.

No penalty was called on the play, which Green said he agreed with despite the fact Pettersson didn't have the puck.

"I've watched it a lot of times," Green said. "It's not a dirty play by their player at all. (Pettersson) gets hooked a little bit. Petey pushes back on him and leans back. Probably tries to give him a bit of a reverse hit and two young guys fall to the ice.

Pettersson has put himself in rookie-of-the-year conversations with his play this season and his loss would be a big blow to a Vancouver team that's been plagued with injuries this season.

He currently leads all first-year skaters with 22 goals and 42 points in 37 games and was rookie of the month in October and December.

The 2017 fifth-overall pick earned the award in October despite missing six games with a concussion.