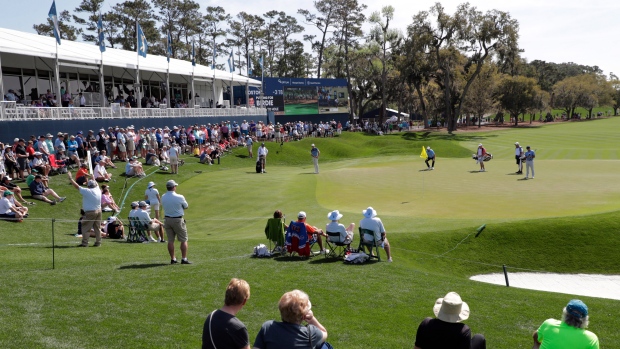 The Players Championship , The Canadian Press

Just 10 hours after saying it would finish the Players Championship without fans, the PGA Tour changed its mind and decided to cancel its flagship event.

It also added the Valspar Championship, the World Golf Championship-Dell Technologies Match Play and the Valero Texas Open events to the cancellation list. That means the tour will have a month off with the next event on the schedule being The Masters.

The abrupt change came after the tour said it gained more information about the rapidly expanding coronavirus pandemic. It also came after a number of golfers questioned the decision to carry one, and following the LPGA’s postponement of three events including the ANA Championship, one of its majors.

With the pressure adding up, the tour pulled the plug.

“It is with regret that we are announcing the cancellation of the Players Championship,” said the tour in its statement on Thursday night. “We have also decided to cancel all PGA Tour events – across all of our tours – in the coming weeks, through the Valero Texas Open.”

The tour first notified all its players via a text message and then sent out a release to the media. It will hold a press conference at 8 a.m Friday morning.

Rory McIlroy, the top-ranked player in the world, was one of those somewhat unsure about continuing to play, saying testing was probably necessary.

“I think for us to keep playing on Tour, we, all the Tour players, and people that are involved need to get tested and make sure that no one's got it,” said McIlroy, “because obviously everyone knows you can have it and not have symptoms and pass it on to someone that's more susceptible to getting very ill from it.”

Other players were putting trust in the guidance of the Tour.

“I've taken the attitude from the very beginning that if we're playing, we're playing,” said Adam Hadwin. “If there’s a golf tournament on, I’ll go play.”

There has been no official word from Augusta National Golf Club, which runs the Masters, on what its plans are. One source said that the tournament would still be held but likely without any fans.

It was expected the club might make a statement early next week on how it intends to proceed.