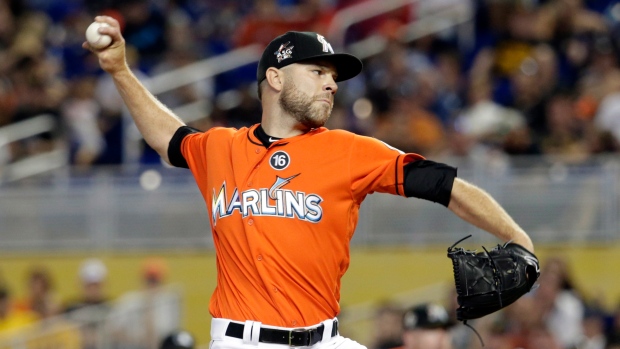 TORONTO — After nearly two years since David Phelps' last appearance in a major league game, the right-handed reliever is ready for his comeback.

The Toronto Blue Jays activated Phelps from the injured list Monday before the opener of a four-game home series against the Los Angeles Angels.

Phelps, who had Tommy John surgery in March 2018, has not pitched in a major league game since Aug. 30, 2017 with the Seattle Mariners.

"A little bit emotional, it's been a good while since I've been on an active roster," Phelps said. "There's been a lot of people behind the scenes, my family, support staff, that have helped me get to this point. It's not so much what I'm doing out there. For me when I think about it, it's just like a big thank you to all those people.

"But yeah, it's definitely been a grind, especially these last 15 months for sure."

Phelps looked to be on track to return from the surgery earlier this season, but he suffered a setback during spring training which he attributed Monday to general soreness and not a new problem.

Phelps made four rehab appearances between high-A Dunedin and triple-A Buffalo before being cleared to make his 2019 season debut.

"Tommy John is interesting," he said. "It's kinda become normalized in our game — a lot of guys have it, a lot of guys come back from it — but it's such an individual rehab in itself that definitely there's a lot of trying times.

"I wouldn't wish it on my worst enemy."

Phelps said he had a number of people to thank for his recovery, including his wife and kids, and the athletic trainers in Seattle who helped him while he sat out the entire 2018 season.

The 32-year-old also said he was thankful for the Blue Jays for giving him an opportunity when they signed him to a one-year deal as a free agent this off-season, and for the athletic staff at Toronto's spring training facility in Dunedin, Fla., where he had spent much of his time since signing that contract.

"There were some pretty dark times there but it's always fun when you start to see that light at the end of the tunnel, not to be too cliche about it," Phelps said. "But I thank this organization incredibly for taking a chance on me in the off-season, still in the middle of my rehab.

"But yeah, I'm excited to get back out there."

Toronto sent reliever Justin Shafer down to triple-A on Monday in a corresponding move. The Blue Jays also announced that they had transferred right-hander Elvis Luciano (elbow sprain) to the 60-day injured list.