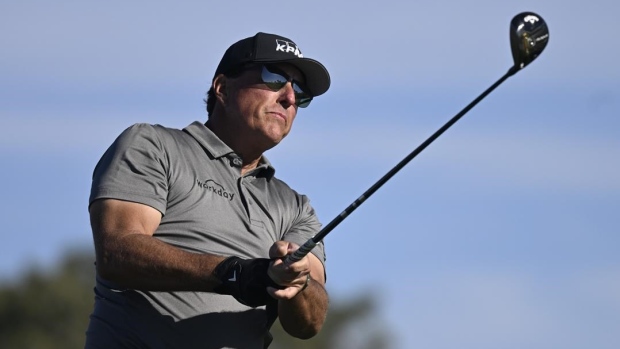 There will be no back-to-back winner of the PGA Championship next weekend.

The PGA announced on Friday that Phil Mickelson will not defend his title at Southern Hills Country Club in Tulsa, OK.

“We have just been informed that Phil Mickelson has withdrawn from the PGA Championship," the tour said in a statement. "Phil is the defending champion and currently eligible to be a PGA Life Member and we would have welcomed him to participate. We wish Phil and Amy the very best and look forward to his return to golf."

Mickelson, 51, last played at the Fortinet Championship last September where he finished tied for 36th.

In February, comments Mickelson made about overlooking Saudi Arabian human rights violations and the state-sponsored murder of journalist Jamal Khashoggi came to light leading to the loss of sponsorships.

"Although it doesn't look this way now given my recent comments, my actions throughout this process have always been with the best interest of golf, my peers, sponsors, and fans," Mickelson said in a subsequent apology. "There is the problem of off record comments being shared out of context and without my consent, but the bigger issue is that I used words I sincerely regret that do not reflect my true feelings or intentions. It was reckless, I offended people, and I am deeply sorry for my choice of words. I'm beyond disappointed and will make every effort to self-reflect and learn from this."

A native of San Diego, Mickelson has won 45 PGA Tour events, which is eighth all-time, and is a three-time Masters champion, a two-time PGA Championship winner and the 2013 Open champion.