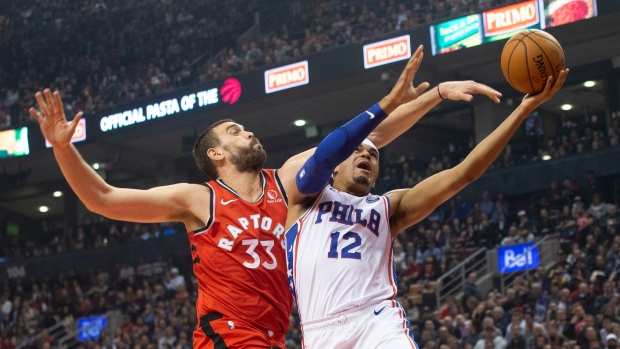 TORONTO – Although the Raptors’ Monday matinee in Atlanta was more dramatic than most would have expected going in, the end result wasn’t especially surprising.

Toronto needed to come back from a nine-point deficit in order to take a commanding 21-point lead in the fourth quarter. Then, in a few uninspiring minutes to close things out, they nearly let it all slip away. It wasn’t pretty, but the Raptors escaped with the win.

It’s not hard to explain why they took their foot off the gas. It was a Monday afternoon game in the middle of January against the worst team in the Eastern Conference. Outside of the W – improving their record to 29-14 and inching closer to second-place – there isn’t much to be taken from their 122-117 victory over the 10-34 Hawks.

At some point in the very near future, the Raptors will have to make a call based on how far they see this team going and whether or not they need help getting there. With the Feb. 6 NBA trade deadline rapidly approaching, president Masai Ujiri, general manager Bobby Webster and the rest of Toronto’s front office are watching intently.

The problem is, evaluating this team – who they are and how good they can be – hasn’t been easy. For most of the season’s first half they operated at less than full capacity while managing a series of significant injuries to key players. Now that they’re finally healthy and have the entire product on the court, the level of competition isn’t exactly ideal for self-assessment.

Their last three games – all wins – came against teams with a combined record of 39-90 (.302). On Friday, when they’re in New York to face the lowly Knicks, they’ll begin a stretch of six straight contests against losing clubs.

Sandwiched in between is a visit from the rival Philadelphia 76ers on Wednesday – a game that will be televised nationally in the U.S. on ESPN and could be very telling for both clubs. Neither team should have any trouble getting up for this one.

After Toronto knocked Philadelphia out of the playoffs in the second round last spring – a thrilling series that ended on Kawhi Leonard’s historic buzzer-beater in Game 7 – the teams have split the first two meetings this season.

Playing without the injured Kyle Lowry and Serge Ibaka, the Raptors pulled off an unlikely win at home on Nov. 25, thanks in large part to holding Joel Embiid scoreless for the first time in his career. The Sixers finally got their revenge a couple weeks later, winning the rematch in Philly but nearly blowing a 20-point fourth-quarter lead in the process.

Both clubs are right in the thick of a tight five-team race behind Milwaukee, who is pulling away atop the East. As of Tuesday afternoon, Toronto sits in third with Philadelphia in fifth, and Miami (second), Boston (fourth) and Indiana (sixth) surrounding them. Just 2.5 games separate those five teams.

The Raptors and Sixers are both trending upward going into the second half of the season, each having won four games in a row. Like the Raps, Philly has been beating up on inferior competition of late, but Wednesday’s showdown is a chance for both teams to measure themselves against somebody in their own weight class.

The Sixers have fared better in those types of games so far this season. They’re 7-5 against the East’s top-six teams. Toronto is just 2-7, although the injuries have been a factor in a few of those losses.

Wednesday won’t be the perfect representation of what this matchup would look like if we see it again in the playoffs, either. Philly will be without Embiid, who has missed the last seven games after undergoing surgery on his left hand. Still, the Sixers are 5-2 without the all-star centre and Ben Simmons – the reigning Eastern Conference Player of the Week – is thriving in his absence.

Philly’s versatile young star has scored 20 or more points in five straight games for the first time in his three-year career, averaging 23.8 (along with 10.0 rebounds and 8.2 assists) on 66 per cent shooting over that stretch.

At full strength, the Sixers are undoubtedly one of the most talented teams in the league, and arguably the most talented team in the East. However, there’s some question about how those pieces fit together, particularly in the case of Embiid and Simmons, who are both at their best with the ball in their hands and operating around the basket. Can they co-exist? Do the other guys compliment them well enough?

Those are the questions their front office will be faced with ahead of the trade deadline and maybe a game in Toronto – even without Embiid – will help them find those answers.

The Raptors shouldn’t have as much existential doubt. Their pieces seem to fit together better than anybody could have imagined when they lost a couple starters, including their best player, over the summer. Still, so much of their internal evaluation process has amounted to educated guesswork.

They’ve overachieved, especially given the circumstances, and that’s an encouraging thing. The notion that they’ve been really good undermanned and will therefore be even better now that they are whole again is fair, but it’s also a leap of faith.

The Raptors have had all of their top-seven players in only 13 of 43 games. They’re 8-5 in those contests, but 0-5 against teams with winning records, including a couple of early-season losses in Boston and Milwaukee – before the injuries hit – and losses to Miami and Philadelphia to open December after Lowry and Ibaka got back. The sample size is limited and inconclusive.

After the Philly game, Toronto won’t see another winning team until a home-and-home series with Indiana on Feb. 5 and 7 – the day before and the day after the deadline.

It’s highly unlikely the Raptors will be sellers, as some thought they might be going into the season. You can go ahead and rule that out. They want to win – now they know they’re good enough and the conference is wide-open enough for them to do so. But will they be buyers and, if so, what are they in need of? Or, maybe they’re confident enough in what they have and want to see it play out.

In either case, Wednesday’s tilt against Philadelphia is an opportunity for some crucial self-reflection just over two weeks before the Raptors have some big decisions to make. ​