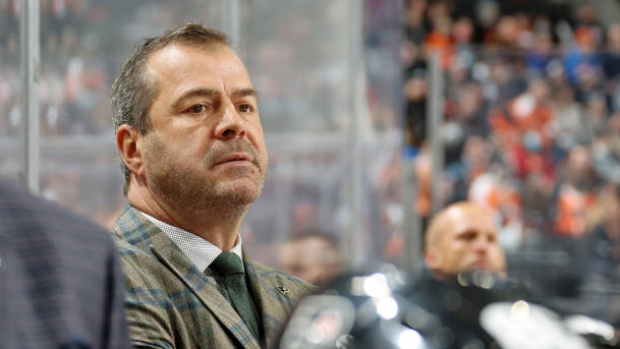 The Philadelphia Flyers saw their winless skid extended to seven games with Wednesday's 4-1 loss to the New York Rangers.

The Flyers, who have dropped to seventh in the Metropolitan Division, have scored just 12 goals over the seven-game skid.

"I'm not satisfied about anything here," Flyers head coach Alain Vigneault said after Thursday's loss. "We have to find ways to win games here. This is serious. We're not scoring. Right now, we're not finishing, so we're going to have to find ways to win games 1-0 and 2-1 until we get some of that finish that I know some of these players have. Right now, we're not seeing it, we're not executing it."

The Flyers were off to an 8-4-2 start to the season before their current run and general manager Chuck Fletcher said earlier this week the team's streaky play has left him unsure on whether to make a move.

"I’d really like to see what we have before we start making changes," Fletcher said during a news conference Tuesday. "I don’t feel I’ve been able to see that to this point in time. We’re always looking, I’m talking to teams every day. If there are ways to make us better, we’ll look at it. But right now, if you just look at how we played the first 10 games versus the last 10 games, clearly one segment was way better than the other.

"So we’ve shown the ability to play better than how we are right now. That’s the most important thing, we’ve got to get back, we’ve got to get playing better. Then from there, we’ll get a sense of what we really are and then we can make those decisions."

The Flyers, who missed the playoffs last season after reaching the Eastern Conference Final in 2020, made several splashes this off-season, including brining in Ryan Ellis, Matt Niskanen, Rasmus Ristolainen and Keith Yandle on the blueline and acquiring winger Cam Atkinson in exchange for longtime Flyer Jakub Voracek.

The changes have failed to produce more offence for the Flyers, who sit 28th in the league in goals scored with 50 through 21 games.