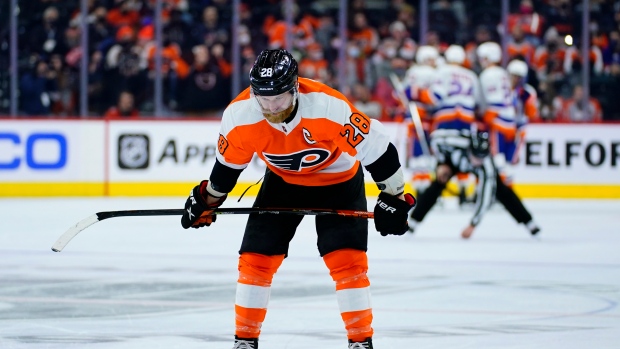 Philadelphia Flyers general manager Chuck Fletcher said Wednesday that Claude Giroux will decide his own fate ahead of the trade deadline.

The Flyers captain carries a cap hit of $8.275 as he plays out the final season of an eight-year deal signed back in 2013.

With the Flyers 16 points back of a playoff spot, questions have been raised about Giroux's future with the team.

“It will be Claude’s decision,” Fletcher said.

Giroux's agent. Pat Brisson, told TSN Hockey Insider Pierre LeBrun that the two will meet over the upcoming weeks to decide how to proceed.

"Claude and I will be spending time together within the next few weeks exploring his best options while having discussions with Chuck," Brisson said via text message.

The Hearst, Ont. native has 15 goals and 34 points in 40 games this season with the Flyers, who are winless in their past 13 games.

Giroux's agent Pat Brisson to me via text message: ``Claude and I will be spending time together within the next few weeks exploring his best options while having discussions with Chuck.''
With full no-move, Giroux can choose to stay put. All options will be looked at obviously https://t.co/WhHuMUoo6A

After missing the playoffs last season, Fletcher said the team is open to all options ahead of the March 21 trade deadline.

“We’re looking to aggressively retool here," Fletcher said. "Everything is on the table.”

Philadelphia fired head coach Alain Vigneault after an 8-10-4 start to the season and have gone 5-12-4 since under Mike Yeo.