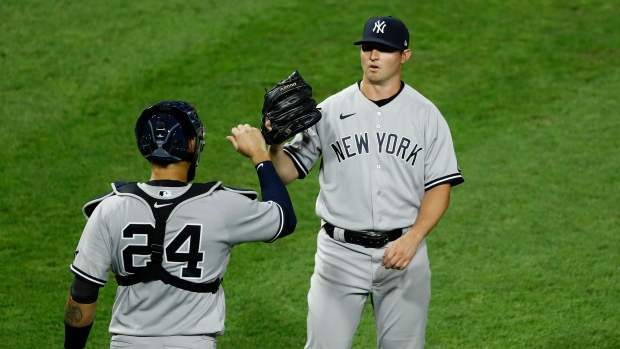 Mike Tauchman’s tiebreaking double in the seventh inning sent the Yankees to a 3-1 victory over the Philadelphia Phillies and a split of their seven-inning doubleheader Wednesday.

Bryce Harper and J.T. Realmuto homered to back Zack Wheeler and lead the “visiting” Phillies to an 11-7 victory over the Yankees in the opener, snapping New York’s seven-game winning streak.

Due to a late schedule change, the Yankees were the “home” team for the first game — even in Philadelphia.

Nola tied a career high with 12 strikeouts in the nightcap, allowing one run on Luke Voit’s homer and three hits in six innings. He gave way to Tommy Hunter after throwing 88 pitches.

Giancarlo Stanton and Voit greeted Hunter (0-1) with consecutive singles. Tauchman lined a double to right-centre for a 2-1 lead. Gio Urshela’s single made it 3-1, chasing Hunter.

“It's not always going to be easy,” Yankees manager Aaron Boone said. “Wheeler and Nola are two really good ones. You have to be able to win these games.”

Adam Morgan replaced Hunter with the bases loaded and got a strikeout and double-play grounder. But the Phillies couldn’t rally against Zack Britton, who got three outs for his fifth save in five tries.

Adam Ottavino (2-0) retired the only batter he faced to earn the win.

“You want to do your job because we know the offence is going to score for us,” Britton said.

Nola hadn’t pitched since the season opener on July 24 because the Phillies had a week off following a COVID-19 outbreak among the Miami Marlins, who started opening weekend in Philadelphia.

“They're stressful innings and hopefully his next start we can get him to 100 (pitches). Couldn't jeopardize his health,” said Phillies manager Joe Girardi, who led New York to three AL East titles, six post-season appearances and its 27th World Series title in 10 seasons managing the Yankees.

In the first game, Wheeler (2-0) yielded three runs — two earned — and six hits over six innings in his second start since signing a $118 million, five-year deal in free agency.

“It’s a tough lineup,” Wheeler said. “You have to make pitches and execute.”

Aaron Judge hit his seventh homer in just the 10th game of the season for the Yankees, who made the Phillies turn to closer Hector Neris for the final out after they took an eight-run lead into the last inning.

New York beat the Phillies 6-3 Monday night in the Bronx but rain postponed Tuesday’s game, forcing the teams to play a home-and-home twin bill in Philly.

The Yankees wore their road gray uniforms and sat in the visitors' clubhouse in the first game. A hype video for the Yankees played on the video screen before the game.

When they took the field, the public address announcer said: “Your New York Yankees.” Phillies fans standing outside the stadium beyond centre field booed that announcement.

Yankees hitters also heard their walk-up music when they came to the plate.

New York lefty J.A. Happ (0-1) gave up four runs on three hits and six walks over three innings in his first career loss versus the Phillies. Happ entered 5-0 with a 1.45 ERA against his former team.

Even though fans aren’t permitted in the ballpark, they made plenty of noise from the streets. Someone rang a cowbell and another person played the drums on and off for a few innings, including nonstop for several minutes in the fifth.

Yankees third base coach Phil Nevin was ejected by plate umpire Angel Hernandez after arguing a called third strike on Mike Ford with one out in the seventh during the opener.

Yankees: All-Star closer Aroldis Chapman, who tested positive for COVID-19 last month, was scheduled to throw a bullpen. It’s uncertain when the lefty will be activated. ... RHP Luis Cessa was reinstated from the 10-day injured list. He tested positive for COVID-19 before camp opened. ... RHP Tommy Kahnle had Tommy John surgery Tuesday. ... Miguel Andújar made his first appearance at third base in the regular season since shoulder surgery on May 20 last year.

Phillies: RHP Seranthony Domínguez had Tommy John surgery on his right elbow last Thursday after a long delay because of the coronavirus pandemic.

LHP Jordan Montgomery (1-0, 1.59 ERA) starts for the Yankees and RHP Zach Eflin makes his season debut for the Phillies in the series finale Thursday.