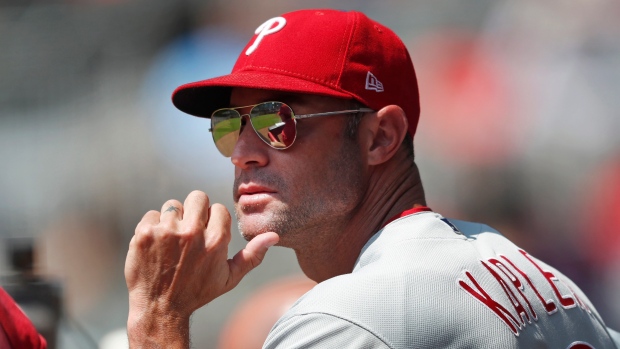 The Phillies managing partner made that clear Friday, a day after manager Gabe Kapler was fired despite resistance from Team President Andy MacPhail and general manager Matt Klentak.

"A CEO's responsibility is to ensure an organization achieves its strategic objectives, and everything I do every day is working toward that end," Middleton said.

It's not the first time Middleton has overruled his front office. After promising last fall to spend "stupid" money, he was the driving force behind the decision to give Bryce Harper a $330 million, 13-year contract. He also made the move to fire hitting coach John Mallee in August and replaced him with former manager Charlie Manuel.

"The decision about a manager is much more directly connected to achieving the strategic objective of winning a World Series, just like signing Bryce Harper, (acquiring) J.T. Realmuto have a stronger impact on them," Middleton said. "So when you get to an impasse on those types of decisions, a CEO not only has the authority to step in, the CEO has the responsibility and obligation to step in."

Middleton conceded public opinion was a factor in his decision, but he pointed several times to the team's September collapses the past two seasons.

"You have to know where your customers are and take their views into account," he said. "When I walked around the stadium and walked around the streets of Philadelphia and people come up to me, there were almost, if not as many people, in favour of keeping Gabe as there were telling me to make the decision I ultimately made. It wasn't as clear-cut as some people think it was."

The Phillies were 20-36 in two Septembers under Kapler. They were only two games behind in the NL wild-card standings after beating Atlanta on Sept. 18 this season but lost eight of the next nine, including a five-game sweep at Washington. They finished eight games behind Milwaukee for the second wild card and 16 behind the first-place Braves in the NL East.

Last year, the Phillies had a one-game lead in the division on Aug. 11 before going 15-31 the rest of the way.

"I kept bumping up against the September collapses," Middleton said. "Ultimately, I felt if I were to bring Gabe back, I had to feel very confident we would have a different outcome in 2020."

Klentak maintained his support for Kapler but didn't undercut his boss.

"I don't think this is a secret, I'm a big fan," he said of Kapler. "I think he's really good at what he does, very talented, very hardworking, a good communicator. I also understand why we are where we are. Wins matter. September baseball matters.

"There's been a lot written and said about power struggles. Was it John's process? Of course it was. But it was very collaborative. This was not John going above everybody's head and coming in with an iron fist. This was as collaborative as can be and I understand it."

Kapler had one year remaining on his contract. Before the season, Middleton extended Klentak's contract through 2022 and MacPhail's through 2021. He insisted he remains confident in them despite calling the shots on several important decisions.

"This is what CEO's do," Middleton said. "You wouldn't have a need for a CEO if everybody in the organization made every decision correctly every time. Why do you think there is a CEO? We are paid to make big decisions. We get paid to ensure our organization meets its strategic objectives. Big decisions are exactly where CEO's have to be. Those are decisions that make a difference and that's I get paid to figure out.

"I'd like to think I actually bring value to an organization, that I'm not a potted plant sitting in the corner."