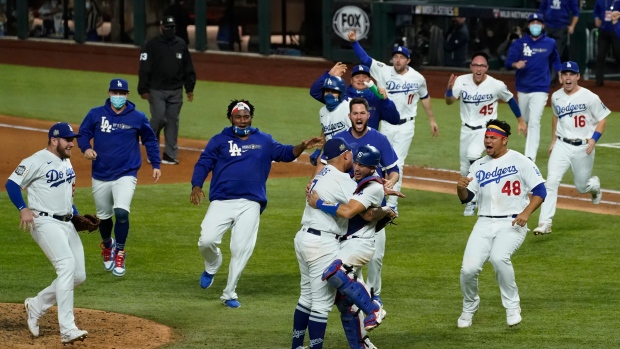 Congratulations to the Los Angeles Dodgers for being crowned the 2020 World Series champions. The Dodgers are the last team standing at the end of a trying season.

There were moments in late July and early August when it looked like MLB wouldn’t be able to complete the 60-game season. The Miami Marlins had 18 players test positive for the coronavirus, followed by the St. Louis Cardinals having to quarantine for 17 days without playing a game. But the players, managers, coaches and medical staffs around the game maintained a level of discipline in following the health and safety protocols. The regular season was completed with only two games not being played. It was remarkable.

The expanded 16-team playoffs worked splendidly. The bubble for the final three rounds of the playoffs kept players healthy until Game 6 of the World Series, when Dodgers third baseman Justin Turner had to be removed because of a positive COVID-19 test. It is a real credit to everyone involved that we got through it.

The Dodgers hadn’t won a World Series since 1988, and there was no team facing more pressure this season. They were the favourites to not only win their eighth consecutive division title but also the NL pennant. They defeated the Brewers, Padres and Braves on the way to the World Series. Atlanta and San Diego were arguably the second and third best teams in the National League. Then they matched up with the Tampa Bay Rays, who had the best record (40-20) in the American League and second best in baseball behind the Dodgers (43-17).

Tampa and L.A. put on a great show in the World Series in a battle of David vs. Goliath. The Rays have the third lowest payroll while the Dodgers have the second highest. It was small market vs. large market, superstars vs. supporting cast.

The team alternated wins in each of the first five games. We saw great hitting, defence, pitching and baserunning in those games. There was drama, emotion and energy galore.

The Dodgers won Game 6, 3-1, but the game told the story of this era of baseball. The sport is now by driven analytics. Statistics and algorithms guide player acquisitions and usage. The Dodgers and Rays are two of the most analytically based franchises in the league. We saw it come into play with the moves each manager made with their pitching staffs throughout the series.

Rays starter Blake Snell, a former Cy Young Award winner, was mowing down the Dodgers through five innings. He had given up one hit and struck out nine. In the sixth, he retired Dodgers outfielder A.J. Pollock for the first out of the inning. Catcher Austin Barnes then singled to centre field. Rays manager Kevin Cash came out of the dugout and immediately signalled to the bullpen for reliever Nick Anderson to come in and replace Snell. Anderson gave up the lead in 10 pitches.

Cash understood that Snell had a 1.35 ERA in the first four innings during the postseason and a 12.46 ERA after the fourth inning. During the regular season, Snell held opponents to a.462 OPS in their first plate appearances, but in the second and third plate appearances those numbers spiked to .977 and .913 OPS respectively.

But the Snell who was on the mound was pitching much differently than the guy who accumulated those numbers. He had all of his pitches working and was making good hitters look bad. In fact, he was taken out just as the Dodgers top of the lineup was due up. Snell had held the Dodgers top three hitters to an 0-for-6 with six strikeouts.

Cash’s mistake wasn’t only taking Snell out of the game, but also in bringing Anderson in. Anderson was unhittable during the regular season, allowing only one earned run in 19 appearances (0.55 ERA). But he had allowed runs in each of his past six appearances in the playoffs.

Anderson wasn’t the same pitcher he had been in the regular season, just as Snell wasn’t the same guy in Game 6 who had put up lesser numbers in previous playoffs. What the manager is seeing with his own eyes has to matter in the decision-making process.

All of the focus on the pitching decision with the Rays takes away from what the Dodgers did to win. The Dodgers made all the plays they needed to win. They ran the bases extremely well and their outfielders made some tremendous catches. They slugged homers and manufactured runs. They came up with clutch two-out hits and scored an amazing 59 two-out runs in playoffs. The Dodgers won this World Series; the Rays didn’t lose it.

Dodgers ace Clayton Kershaw put to rest the notion that he can’t pitch in the postseason. He went 4-1 with a 2.93 ERA, including two wins in the World Series. He is now the all-time strikeout leader in the postseason and has earned his first ring.

This postseason also saw the breakout of a new young superstar in Rays outfielder Randy Arozarena. He set postseason records for hits (29), home runs (10) and total bases (64). He can do it all. The amazing thing is that he wasn’t called up to the major league team until Aug. 30, so he still has rookie status next season.

The drama and excitement of the World Series was a fitting conclusion to a season like no other. So, what will next year bring?

It is so hard to know for sure what the 2021 season will look like. The uncertainty about the pandemic and its continued impact on the world will very likely cause an extremely conservative approach by owners and their general managers this off-season.

I expect players to be frustrated and the signings to progress slowly as players wait things out to see if there will be a vaccine, which could mean that fans would be allowed in the stands. Fans in the stands means revenue for the owners. There is also the matter of what MLB says is close to $3 billion in losses from the 2020 season that owners will want to account for in some way in 2021 and beyond – whether there are fans or not.

Considering the significant losses that teams incurred this year, I will be surprised if there are any games played in 2021 without fans in the stands. The owners can’t afford to do it for even the 60 games they played this season. We could be looking at another labour dispute before the big negotiations for the CBA after the 2021 season.

I hate to be such a downer after the significant accomplishment of completing the season and the excitement of the World Series, but for 29 other teams the focus is already on the 2021 season, so mine is too.