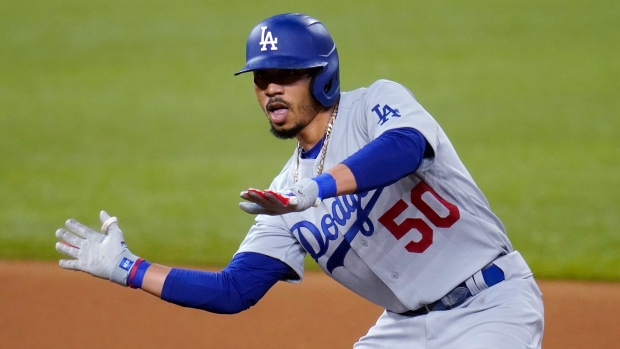 Postseason baseball is as passionate as it has ever been. The emotions that always come after big plays at this time of year haven’t been compromised in any way by the absence of fans in the ballparks.

We are seeing more bat flips than ever before and more guttural screams from pitchers at the end of innings. We see leaping celebrations between teammates after diving catches and dances in the dugout after homers.

In Game 2 of the Dodgers-Padres series, San Diego third baseman Manny Machado hit a home run and then rifled his bat toward his club’s dugout and screamed expletives to motivate his teammates. Later in the same game, he was offended by Dodgers pitcher Brusdar Graterol for throwing his glove and flipping his hat in celebration of a home run-saving catch by centre fielder Cody Bellinger. Graterol’s teammates quickly came to his defence in support of his passionate response.

The celebrations are becoming more acceptable and more frequent. Most players accept that the big moments are worthy of emotional responses that aren’t meant to offend. Not every player is there yet, as Machado demonstrated, but it will become commonplace in the next couple of years.

The seats are empty, but there is more than enough positive and negative energy on the field. The players are not missing the fans nearly as much as the fans are missing the players.

The scheduling of the playoffs games this year is much different than we have ever seen.

There are no off days for travel because teams are in bubbles at neutral sites. The Wild Card (best of three), Division (best of five), and League Championship Series (best of seven) have no scheduled breaks. This is a true test of a team’s full 28-man roster. It’s much more like the regular season, where teams could play on 20 consecutive days.

In the past, the playoff schedule included multiple off days during a series, which would allow teams to manage their starting rotations and bullpens in a way that ensured their key pitchers would pitch every critical inning. The playoffs were managed much differently than the regular season and weren’t necessarily a true indicator of the best overall roster. The World Series champion under that format was often the team that had the best 15 players.

Bullpens have become more important over the past few years. We have seen fewer innings pitched by starters and more by relievers. The use of openers has become a more common practice. In fact, there were five teams this season, including the Blue Jays, that had more innings thrown by their bullpen than their rotation. Interestingly, three of the five teams were playoff teams: the Braves, Rays and Jays. The Red Sox and Tigers did not make the postseason.

The other thing that has become obvious is that starting pitching remains very important this postseason. The deeper the starter goes in the game, the more it protects the bullpen and keeps pitchers available for the next game. We have seen clubs use openers this postseason because they don’t have enough quality starting pitching, but using so many relievers in a single game compromises them for the next couple of days.

General managers were not informed of the postseason format before the trade deadline on Aug. 31, so most teams believed they had enough pitching to manage the postseason only to realize that, under the current format, they are a bit thin.

With off days in a series, teams could get by with fewer relievers. Without off days, they don’t have enough bullpen depth or starting depth.

- One of the new rules implemented this year is the "three-hitter-rule" for pitchers. The rule states that a pitcher must face at least three hitters when they enter the game unless they finish an inning. It was intended to reduce the number of pitching changes and speed up the pace of play. However, I believe it is a rule that should be eliminated in the postseason. Once a team makes the playoffs, managers should be able to make whatever substitutions they want to try and win a game.

- The strike zones have been very inconsistent in the postseason. There are some umpires on crews that have no business of being in a playoff series, but close to a dozen umpires opted out of the season due to the coronavirus and it has thinned the pool from which to choose for playoff assignments. It is something that we will have to live with, but don’t be surprised when there are big mistakes made in important games.

- It used to be said that teams needed to be able to manufacture runs in the postseason to have success. The idea is that productive outs can be used to advance runners to score. In close games, it was the team that could get a man on base, get him over and get him in, that would win playoff series. But that’s not how the game is played today. Strikeout rates continue to climb, so contact leading to productive outs is not very common. In the playoffs, it is very difficult to string four or five singles together to score a couple of runs. Homers win games in 2020. In fact, so far this postseason, the teams that hit more homers in a game are 21-1. Manufacturing runs can be important at times, but it is never more important than long balls.

- Blue Jays fans got a glimpse of an emerging star in the Wild Card Series against the Tampa Bay Rays. Remember the name Randy Arozarena? He is the Rays outfielder who tripled against Robbie Ray in Game 1. Arozarena came over in a trade last off-season from the St Louis Cardinals. He is from Cuba and signed with the Cards as an undrafted free agent out of the Mexican Professional League. He is crushing the baseball this postseason, hitting .500 with three doubles, a triple and two home runs in just 24 at-bats. He has the unique combination of power and speed. He hits everything hard and can absolutely fly. He will be one of the most exciting young players in the game. He is ranked as the Rays’ 19th-best prospect by MLB Pipeline. Can you imagine how good the other 18 must be? He is clearly exceeding expectations.

- Former Blue Jay minor leaguer Travis d’Arnaud has emerged as one of the top catchers in baseball. He came to the Jays from the Phillies organization in the Roy Halladay deal in December 2009. Toronto traded him to the New York Mets along with Noah Syndergaard in the R.A. Dickey trade in December of 2012. d’Arnaud showed flashes of being a good player with the Mets but he battled injuries, including undergoing Tommy John Surgery in 2018. The Mets released him in May of 2019. He signed with the Dodgers and only played one game before they sold him to the Tampa Bay Rays. He came into his own with Tampa last year, but was a free agent after the season. He signed with the Atlanta Braves and has become a solid defender and big offensive threat at the plate. He has hit .421/.500/.842 with two homers and seven RBI so far in the postseason. Plus, he has guided the young Braves pitching staff to four shutouts in five games this postseason, which is a record. He has finally blossomed into the two-way catcher that several teams anticipated.

- Don’t look now but the biggest villains in baseball have advanced to the ALCS. The sign-stealing Houston Astros defeated the Oakland A’s in four games in the ALDS. That was after defeating the powerful Minnesota Twins in the Wild Card Series. All season long the Astros played like they had their tails tucked between their legs. They were passive and emotionless. They had no joy or passion. They still made the postseason with an unimpressive 29-31 record. But they started to come back to life when they beat the Twins, while the series against Oakland regenerated their confidence and swagger. Can you imagine a rematch to the 2017 World Series against the Los Angeles Dodgers? It could happen.