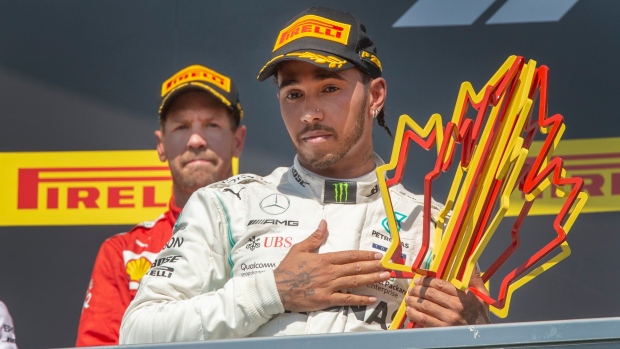 Lewis Hamilton started from pole position and was never really challenged on his way to a dominating victory in the Qatar Grand Prix two weeks ago.

It was Hamilton’s second straight victory and the 102nd of his career. But they haven’t all come that easy for F1’s biggest star as he searches for his fifth straight driver’s championship.

In fact, Max Verstappen could have clinched the title in Sunday’s Saudi Arabian Grand Prix with a win and a poor showing by Hamilton, but the Mercedes zoomed past the Red Bull with six laps to go and never looked back to win under the lights.

When the dust settled, Hamilton and Verstappen found themselves tied atop the standings with 369.5 points.

“I love it. I love the close battle and the pressure and the demands it puts on you and the whole team. I've thoroughly enjoyed it,” Hamilton said two weeks ago of his battle with Verstappen.

This means the title will all come down to the season’s final race next week at Yas Marina in the Abu Dhabi Grand Prix. Verstappen won last year’s but Hamilton claimed the previous two.

Whether or not Hamilton wins this year’s title, he’s still done more winning than any driver in F1 history. And he’s never been better than he’s been in Montreal.

The last time the Canadian Grand Prix was held in 2019, it was Hamilton who picked up the victory. Ferrari’s Sebastian Vettel actually crossed the finish line first but was handed a five-second penalty for "unsafe re-entry," giving the Englishman his seventh career victory at Circuit Gilles Villeneuve and putting him into a tie with the legendary Michael Schumacher for the most all time.

Hamilton has won 58 per cent of his starts at the Canadian Grand Prix, his highest percentage of any track on the F1 circuit.

It's not new, either. He’s been having success in Montreal his whole career.

After an impressive 2006 season on the GP2 Series, Hamilton was announced as McLaren's partner to defending F1 champion Fernando Alonso. But he quickly showed he wasn’t there to be Alonso’s sidekick. The 22-year-old recorded podium finishes in each of his first five races and by the time the grid reached Montreal for race No. 6 of the season, he was tied with Alonso for the lead in drivers’ standings.

Hamilton snatched up the first pole position of his career and kept that momentum going the next day with his first F1 win, moving into an eight-point lead in the title race.

"I'm having a fantastic day, this is historic," Hamilton said after his first win. "I was trying to control myself on the last lap. I just wanted to stop the car and jump out.”

Ten years and three F1 titles later in 2017, Hamilton won Montreal again – his third straight Canadian GP victory – and took some time to reflect back on where it all started.

"It's always been a special place for me," said Hamilton. "It's crazy to think after 10 years that I enjoy racing every lap just as I did 10 years ago."

It makes sense given the race’s history.

Originally held at Mosport Park in Bowmanville, Ont., the Canadian Grand Prix moved to Montreal for good in 1978 and took up refuge on Notre Dame Island just east of the city’s downtown. Called Île Notre-Dame Circuit until 1982, the track quickly became a mainstay on the F1 schedule and offered some wire-to-wire finishes over the years.

With international travel and large public gatherings drastically reduced due to COVID-19, the race was called off in 2020 and 2021. But fear not racing fans. Not only is the Canadian GP returning to Montreal in 2022 on June 19th, it’s sticking around a lot longer as an agreement was reached to keep the race at Circuit Gilles Villeneuve through 2031.

Bell signed a deal earlier this year to buy race promoter Octane Racing Group Inc. in a move that will see Canada’s telecommunications leader bring financial stability to the race.

To make things even more exciting, now is your chance to secure your tickets as F1 returns to Canada for the first time in three years. There’s plenty at stake as Hamilton looks for his record eighth Canadian GP title while Canadians Lance Stroll and Nicholas Latifi search for their first career F1 victories. And what better place to do it than on home soil?

Please note that in the event of new restrictions regarding the number of spectators permitted to attend, priority will be given to ticket holders who have chosen to retain their tickets from the 2020 edition.