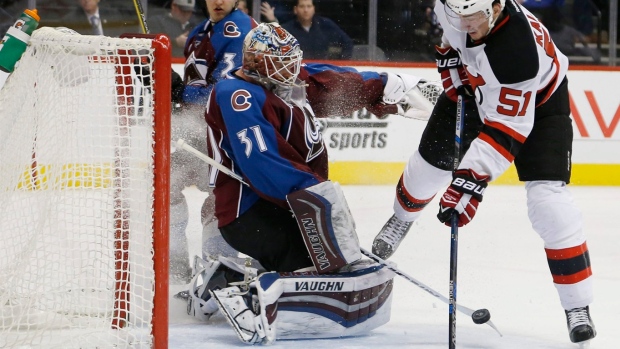 DENVER - The Colorado Avalanche were a little green on the blue line and in goal.

No big deal, though. These youngsters played with poise.

"It was a full team effort. Everybody really earned that shutout," Pickard said.

New Jersey couldn't generate many quality scoring chances even though the Avs recently brought up 20-year-old defencemen Nikita Zadorov and Chris Bigras from San Antonio of the American Hockey League.

Paired with veterans, they were rock solid.

And when shots did get through, the 23-year-old Pickard was there to turn them aside. He started and gave a breather to regular goalie Semyon Varlamov, who's allowed 14 goals over his last four games.

Pickard began the season with San Antonio but was recalled last month for a second time this season after backup Reto Berra hurt his ankle. Pickard has made two starts — both wins — and four relief appearances in 2015-16.

"He was really good," Colorado coach Patrick Roy said. "I thought we played well in front of him as well but a shutout is a shutout. A goalie has to make some saves and he did."

Defenceman Tyson Barrie added a short-handed goal and Carl Soderberg an empty-netter to help the Avalanche improve to 9-0-1 in their last 10 games against New Jersey. The Devils haven't won at the Pepsi Center since March 15, 2008.

The Devils pulled goalie Cory Schneider for an extra skater with around 2:30 remaining, but it led to a clinching goal by Soderberg with 27.5 seconds left. They dropped to 1-2 on a four-game trip.

"We have to continue to play a little bit smarter," said Devils coach John Hynes, whose team finishes up the road swing Saturday in Arizona. "Try to find a way to win a game in Arizona and get the train back on the tracks here."

These days, the goal hasn't looked all that inviting no matter who's in net. The Devils have six goals in their last six games, which includes being blanked twice.

"You're not going to win any games scoring zero goals," Kyle Palmieri said. "Hopefully one squeezes through and the flood gates open from there."

Barrie gave Colorado a 2-0 lead early in the second period when he tapped in a puck after a shot by Nathan MacKinnon trickled past Schneider. Barrie is in the midst of quite a stretch and was recently honoured as the league's third star of the week.

Duchene scored his team-leading 22nd goal of the season before many of the fans had time to settle into their seats. Duchene beat Schneider with a wrist shot for the fastest goal to start a game by Colorado this season.

"We wanted to set the tone right away," Duchene said. "We're a good team when we score first and getting that one right away was a big momentum for us."

Colorado changed up its defence with Erik Johnson (lower body) and Brad Stuart (back) sidelined. Zadorov is a big, bruising defenceman who was acquired as part of the deal that sent Ryan O'Reilly to Buffalo last June. Bigras was a second-round pick by Colorado in 2013 and made his NHL debut Thursday.

"They both played a good game," Roy said.

Devils forward Bobby Farnham served the first of his four-game suspension for an interference penalty against St. Louis on Tuesday night. The league also fined forward Jordin Tootoo $2,000 on Thursday for his second offence of the diving-embellishment rule.

Tootoo was a scratch against Colorado.

NOTES: Devils LW Tuomo Ruutu returned after missing three games with a lower-body injury. ... Roy considered bringing up first-round pick Mikko Rantanen, but he said Rantanen is dealing with a hand injury. ... Duchene and Gabriel Landeskog had seats near the basket when the Denver Nuggets beat a Golden State team led by Steph Curry on Wednesday. "That guy is one of the best athletes in the world right now," Duchene said of Curry.