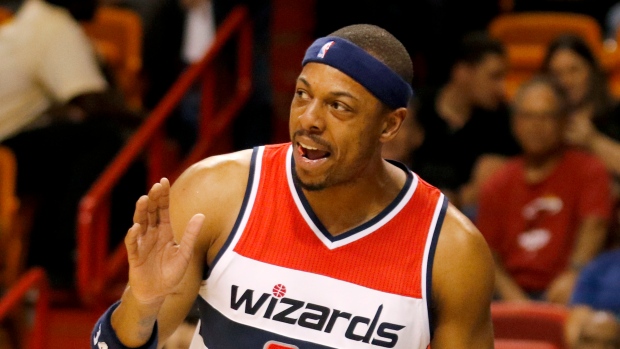 The Toronto Raptors could very well play the Washington Wizards in the first round of the playoffs and with that comes another matchup with veteran All-Star Paul Pierce.

Pierce, who helped beat the Raptors as a member of the Brooklyn Nets in a dramatic seven game series last spring, hasn't lost any sleep when it comes to the possibility of that matchup.

"We haven't done particularly well against Toronto, but I don't feel they have the 'It' that makes you worried,'' Pierce told ESPN in a recent interview. "There isn't a team I look at in the Eastern Conference that makes me say, 'They are intimidating, we don't have a chance.'

The Raptors swept their three game season series against the Wizards this year.

The 37-year-old isn't worried about the first place Atlanta Hawks either.

"As good as Atlanta is, they just don't give off that aura where we're afraid of them," explained Pierce.

Toronto and Washington will play each other in the first round if the Raptors fall to the Charlotte Hornets or if the Chicago Bulls beat the Atlanta Hawks Wednesday night.

Despite the lack of praise for the team, Pierce has said in the past how impressive the Raptors crowd is come playoff time.

“Coming here and doing it on the road in one of the great environments I’ve ever been in. I think back to all the playoffs we’ve played in, and on the road, this is one of the best environments in basketball, as far as the noise, enthusiasm — this is as tough as it’s gonna get,” said Pierce following the Nets Game 7 victory over the Raptors last season.