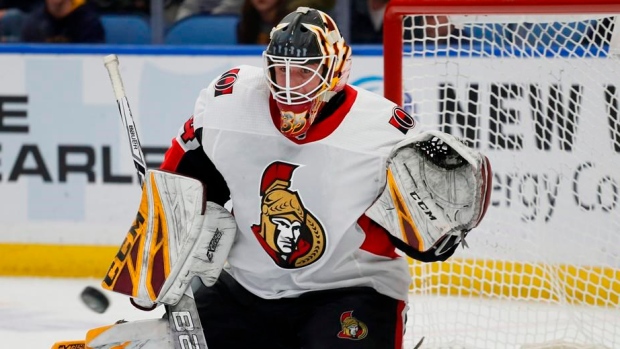 Ottawa Senators general manager Pierre Dorion told TSN 1200 Friday that goaltender Joey Daccord will be out for a while and probably will miss the remainder of the season.

An exciting start to the week, followed by what appears to be a cruel end for Joey Daccord. As @rayferrarotsn says...it’s impossible not to cheer for this guy. Get well Joey. https://t.co/A5s5pgY2TK

Pierre Dorion - Daccord's injury is not short term. Murray is week to week. Hogberg could be in Belleville by the end of the month for a conditioning stint.

Dorion also said that goaltender Matt Murray (upper-body) is week-to-week, while Marcus Hogberg (lower-body) could be in Belleville by the end of the month for a conditioning stint.

Meanwhile, new goalie Anton Forsberg, who was claimed off waivers from the Winnipeg Jets earlier this week, practiced with the team Friday morning.

The Senators will next play Monday night against the Calgary Flames.