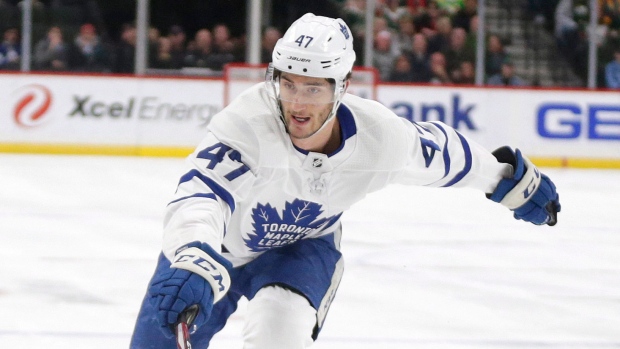 TORONTO – It’s been years since William Nylander first played with Pierre Engvall in the Swedish National Team’s U-18 and U-20 programs in 2013-15, but when Leafs’ head coach Sheldon Keefe recently reunited the countrymen on a unit with John Tavares, Nylander was pleased to find their chemistry has stood the test of time.

“It was the same; he was the same way,” Nylander said after the Leafs’ optional morning skate on Thursday. “He’s probably one of the fastest guys on the ice. Back then he could get down low and get pucks back [like he does now] and he had a heavy shot too to score a lot of goals.”

Engvall is also adept at setting up his linemates, like he did for Nylander in Tuesday’s 7-4 Leafs’ win over New Jersey.

That was the first full contest for Engvall on Toronto’s second line, and he did the leg work with some slick stickhandling to help Nylander pot his 20th of the season.

“He’s actually had a couple really nice passes in his time up here,” Nylander insisted. “I think that ability of his is underrated.”

There's much about Engvall’s game that might fall into that category, especially since his surprising emergence as one of the Leafs’ most versatile forwards.

Since being recalled from the American Hockey League’s Toronto Marlies to make his NHL debut under former Leafs’ coach Mike Babcock on Nov. 19, Engvall has skated on nearly every line – as a winger and a centre – and become an integral part of the penalty kill, averaging 1:13 shorthanded per game.

The 23-year-old has been a steady producer, with his seven goals and 13 points in 25 games ranking seventh in output among Toronto’s forwards since his arrival. Perhaps most importantly, Keefe quickly knew he could trust Engvall to not only slide in anywhere, but actually elevate other players, which is why he slotted Engvall with Nylander and Tavares.

“That line was having some real trouble in leaving the offensive zone and getting caught, and a lot of the chances we were giving up were coming from [them],” Keefe said. “We wanted Pierre to really help with that cause, just with how he skates, and then how he works. The fact that he can track and skate and get back the way that he does, and I thought throughout the game [on Tuesday] he was in good spots.”

Tavares doesn’t have the history with Engvall that Nylander does, but in their short time together Toronto’s captain has seen an evolution to Engvall that can benefit their line moving ahead.

“I think he's continued to gain confidence in his game and find his way in terms of how he impacts the game for us and his role,” Tavares said. “He continues to get better and better with the puck, with playmaking, and having a good knack around the net and finishing plays off. So I’m just trying to read and react off that. It puts a lot of pressure on the opponent, in terms of how he can forecheck and get on top of people quickly.”

Calling the 6-foot-5 Engvall a “natural athlete,” Tavares isn’t surprised by how easily his new linemate has adapted to the NHL.

“You can just really tell he's a force out there,” Tavares said. “Certainly with his skating ability and his size, his physical strength, you just try to read some of his tendencies and figure out how we can best be productive.”

Combining for four points as a line in Tuesday’s win was a good start on that front, and the Leafs will need more of the same on Thursday against a Calgary Flames team that’s already beaten them once this season in disappointing fashion.

Back on Dec. 14, Toronto was leading Calgary 2-1 heading into the third period, and then gave up three goals in less than three minutes en route to a 4-3 loss. That would stand as the Leafs only regulation defeat in a span of 13 games through Jan. 4, a constant reminder of what they let slip away, and how it can’t happen again.

“When things [go wrong] so quickly in such a short amount of time, there's some randomness to it,” Keefe explained. “So we focused more on the other things that happened throughout the 60 minutes that we think are factors that we need to do a better job of today. We left two points in Calgary that we'd like to get back here tonight.”