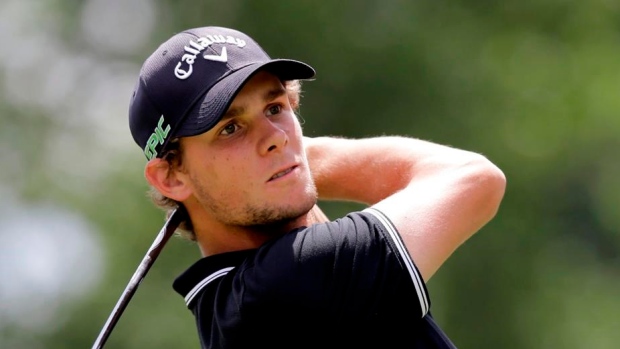 VYSOKY UJEZD, Czech Republic — Thomas Pieters shot a 3-under 69 Sunday to become the first golfer to win the Czech Masters for the second time, beating Adri Arnaus of Spain by one stroke.

Pieters took a three-shot lead after a birdie on the 7th only to bogey the 8th. The overnight leader added a birdie and a bogey on the back nine in the final round to finish on 19-under 269 for his fourth European Tour victory, and his first since the 2016 Made In Denmark tournament.

"I felt like I was in control today, almost the whole day and I kind of did my own thing," Pieters said.

He also won at the Albatross Golf Resort near Prague in 2015 for his first Czech Masters title.

"I'm relieved. It's been a long time, it's been three years since I last won," the Belgian said. "It feels good to win again. I never doubted myself but it's just been a long road of not feeling that great with the golf swing. It feels good to get back on track again and get another win."

Arnaus birdied two of his last three holes to post a 69.

Seven strokes off the pace after the third round, defending champion Andrea Pavan of Italy shot a 7-under 65 for a 16-under 272 to tie for third with England's Sam Horsfield (68).

Three-time major champion Padraig Harrington closed on 284 after a 70.

(This story has been corrected to show that Pieters and Arnaus both shot 69, not 68, in the final round.)