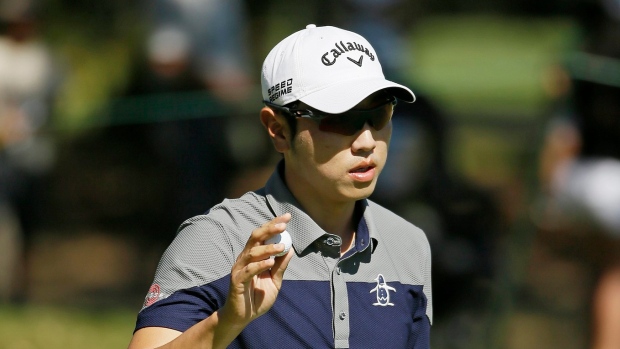 BOISE, Idaho — Scott Pinckney shot an 8-under 63 on Saturday for a share of the lead in the Albertsons Boise Open, the third of four Web.com Tour Finals events.

Pinckney matched two-time PGA Tour winner Sangmoon Bae and Roberto Diaz at 14-under 199 at Hillcrest Country Club. Bae shot 67, and Diaz had a 65 on a day when 11 players were tied for the lead.

Pinckney returned to play the Web.com Tour this season after missing the majority of the 2017 season because of a back problem.

"It was hard sleeping. I couldn't bend down," Pinckney said. "When I had to sneeze, I tried to find something to brace myself. It just was not fun. ... My confidence was hanging by a thread, but I knew I had the game to compete on the PGA Tour and out here, so I just kept grinding and kept working hard. I focused so much on my health and body that it's starting to pay off."

Bae returned this season after two years of mandatory military service in South Korea. He's 12th on the Finals money list with $38,156, with the 11 players ahead of him already locked in to earn cards.

"It has been a while since leading, throughout my military service and this year," Bae said. "I am really happy to see my name on the leaderboard."

Pinckney birdied five of his last seven holes, making a 12-footer on No. 18.

"It was awesome," Pinckney said. "It was nice to get it up on that top shelf. It was a quick putt so I just wanted to get the right speed and it happened to go in for a nice finish."

"The last putt was very important," Diaz said. "Obviously, every shot counts out here and more toward the 25 at the end, but I think that last putt made me more calm looking toward tomorrow."

Kyle Jones had a 64 to get to 12 under. He already earned a card as a top-25 finisher on the Web.com Tour regular-season money list.

The series features the top 75 players from the Web.com regular-season money list, and Nos. 126-200 in the PGA Tour's FedEx Cup standings. Jones and the other top-25 finishers on the Web.com money list are competing against each other for tour priority, with regular-season earnings counting in their totals. The other players are fighting for 25 cards based on series earnings. The Web.com Tour Championship is next week at Atlantic Beach Country Club in Florida.