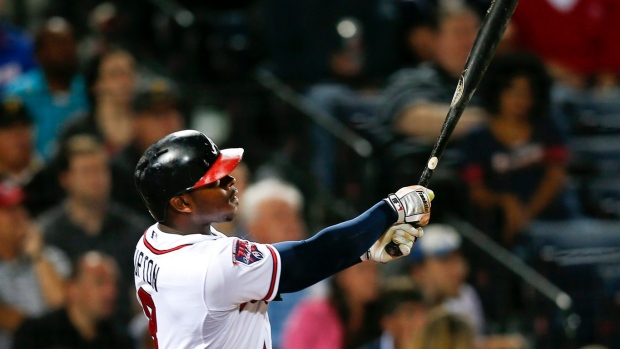 ATLANTA - Jeff Locke attempted to shrug off an ugly loss as "just another game that didn't go your way."

With the Pirates in a tight division race, however, it was much more.

Locke gave up six runs in only four innings and the Pirates missed a chance to move up in the NL Central race, falling to the Atlanta Braves 6-2 on Wednesday night.

It marked the second time in five September starts Locke (7-6) failed to last longer than four innings. He allowed 13 baserunners — eight hits and five walks — in the short start.

Locke said he struggled "pretty much the whole game, really."

Manager Clint Hurdle said Locke's pitches were "up in the zone" and he lacked consistency with his fastball and secondary pitches.

"So it was tough for him out there," Hurdle said.

The Pirates, who clinched a playoff spot on Tuesday night, stayed 1 1/2 games behind division-leading St. Louis, which was beaten by the Cubs. Pittsburgh lost for only the fourth time in its last 19 games.

Hurdle wouldn't say if the start could affect Locke's role in the playoffs.

"You know what, we're not even there," Hurdle said. "We'll have those conversations when we need to. That's not a question I'm going to answer tonight. When we sit down, we'll look at the volume of work and we'll look at matchups."

Andrew McCutchen had two hits, including a two-run homer in the fifth inning after Atlanta led 6-0.

The Pirates had two baserunners in the ninth before Braves closer Craig Kimbrel struck out McCutchen and Travis Snider for his 45th save.

"We still battled," McCutchen said. "We still fought at the end."

Pittsburgh catcher Russell Martin left the game in the fifth inning with tightness in his left hamstring.

"I didn't tweak it; it's just tight," Martin said, adding it was "a smart and cautious decision" to leave the game and guard against a more serious hamstring injury.

The Braves improved their dismal September record to 5-16. Their six runs matched their combined output in the five straight losses.

Pittsburgh lost a day after its clubhouse celebration at Turner Field, where champagne and beer flowed freely. The Pirates wrapped up their post-season berth exactly one year after clinching a place in the 2013 playoffs to end a 21-year drought.

McCutchen drove in Starling Marte, who had two hits, with his 25th homer.

UP, UP AND AWAY

Upton set a career high with his 28th homer. He has 99 RBIs, also a career high, and has been a highlight of a bad season for Atlanta hitters.

Locke and Atlanta's Jason Heyward lived together when the two were beginning their professional careers at Danville in the Braves' farm system. Locke said he and Heyward remain good friends and talk or text regularly.

Heyward had no hits in three at-bats against Locke.

The Pirates claimed right-hander Chaz Roe off waivers from the New York Yankees. Roe had been designated for assignment by the Yankees on Sunday.

The 27-year-old Roe began the season with the Marlins before being acquired by the Yankees on August 31. He made three appearances with New York this season, and also posted 14 saves in 47 games (64.0ip) at Triple-A New Orleans.

Roe will take the roster spot of right-handed pitcher Charlie Morton, who was placed on the 60-day D.L. with right hip inflammation.

Pirates: Martin singled in the second inning and seemed to hurt himself when he returned to first base on a pickoff throw. He remained on one knee for several seconds before rising slowly and said after the game "it looked funny" because his foot slipped off the bag.

Braves: 3B Chris Johnson had two hits and scored two runs before he left the game in the sixth with a lower back strain. ... C Evan Gattis is expected to make his first start since Sept. 7 on Thursday night but likely won't play the full game. He has been held out with strep throat and a kidney stone.

Pirates: Edinson Volquez (12-7) will start on Thursday night in the final game of the four-game series. He hasn't faced the Braves this season and is 2-3 against Atlanta in six career starts.

Braves: RHP David Hale, replacing Mike Minor in the rotation, will make his first start since June 28 in the Braves' final home game of the season. Hale (4-4) has pitched in relief in 39 of his 44 games.