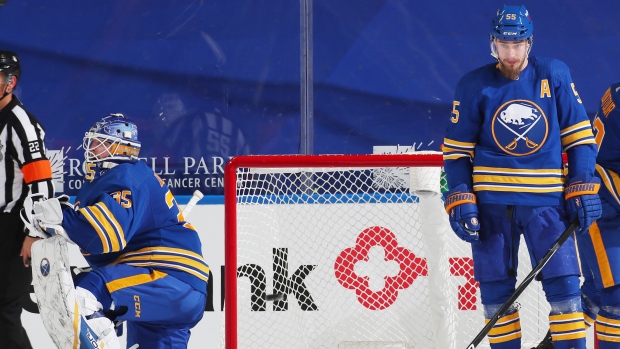 Will he stay or will he go?

The Buffalo Sabres defenceman said during his season-ending press availability on Monday that he told general manager Kevyn Adams that he's open to be traded and he's also okay with staying with the team he's spent the entirety of his seven-year career.

"I'm open for all the ideas," the 26-year-old Finn said. "Right now, it's hard. Obviously the season just ended, so, yeah, I'm frustrated and I'm pissed and it sucks. So I told [Adams] I'm open for all the scenarios: staying, or if he trades me, I'm fine with that, too."

Having never played a playoff game after 542 regular season games, Ristolainen says he has no interest in continuing a rebuild and wants to play in the postseason next year.

Ristolainen said he doesn't want to wait multiple years through another rebuild.
"We have to get to playoffs next year. For me, it's either here or hopefully somewhere." #Sabres

"We have to get to the playoffs next year," Ristolainen said. "For me, it's either here or hopefully somewhere [else]."

Originally taken with the eighth overall selection of the 2013 NHL Entry Draft, Ristolainen has one year remaining on a six-year, $32.4 million deal that carries with it a $5.4 million cap hit.

He appeared in 49 games for the Sabres this season, scoring four goals and adding 14 assists in 22:17 of ice time a night.