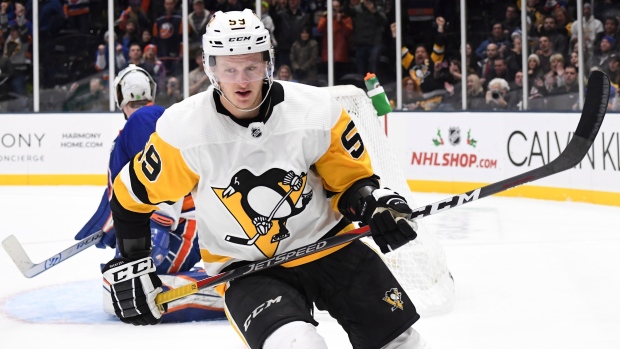 Pittsburgh Penguins winger Jake Guentzel said Wednesday he hopes to be ready to face the Montreal Canadiens in the team's play-in series this summer.

"I'm getting better every day," Guentzel said. "I'm just sticking to the protocol. If we start playing, hopefully I'll be ready by then."

Guentzel, who underwent shoulder surgery on Dec. 30, said he has been skating for several weeks, since injured players were allowed to rehab at team facilities during the NHL's Phase 1.

Guentzel: "I'm getting better every day. I'm just sticking to the protocol. If we start playing, hopefully I'll be ready by then." pic.twitter.com/ySyLEZRnRC

Penguins general manager Jim Rutherford said last month the team was optimistic Guentzel would be able to play when the NHL resumes. His original timeline for recovery was 4-6 months.

The 25-year-old posted 20 goals and 43 points over 39 games with the Penguins this season, his fourth in the NHL.

The Penguins tweeted a video of multiple players skating Wednesday under the NHL's Phase 2. Sidney Crosby, Evgeni Malkin and Bryan Rust were among those on the ice.

LOOK WHO'S BACK ON THE ICE! 🙌 pic.twitter.com/BrJUd5VCPs