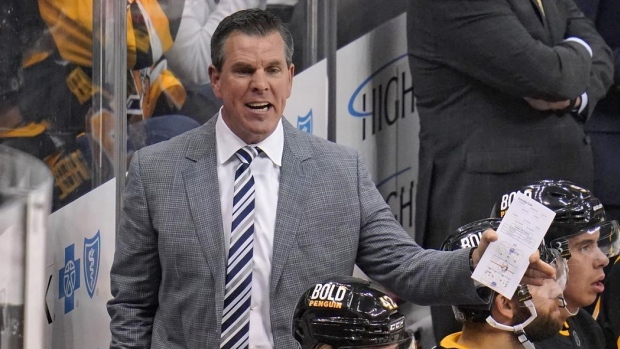 The team made the announcement a few hours before the Penguins were scheduled to take on the Flyers. Assistant coach Todd Reirden will fill in for Sullivan. Reirden said Sullivan is symptomatic, which would indicate he will be out several days under the NHL's COVID-19 protocol.

“Wish nothing but the best for him and for a speedy recovery here as we go through the process,” Reirden said.

The Penguins have been grappling with a COVID-19 outbreak since training camp opened. Eight players have entered the protocol since mid-September, including captain Sidney Crosby and defensemen Marcus Pettersson, Brian Dumoulin and Chad Ruhwedel this week. All will be unavailable to face Philadelphia.

Sullivan said Wednesday that Crosby and Pettersson were symptomatic and Ruhwedel was asymptomatic.

Forwards Zach Aston-Reese, Jeff Carter and Jake Guentzel tested positive for COVID-19 since training camp opened but have since returned. Defenseman Kris Letang, placed in the protocol on Oct. 23, will return to the ice against the Flyers.

Sullivan's positive test came on a day the Penguins canceled their morning skate in an effort to minimize their face-to-face interactions before the game.

“It seems like it’s been something we’ve been dealing with for a while now,” Reirden said. “As we work through it here. The focus is going to be on us trying to find some of the hockey we were playing in the beginning of the year.”

The Penguins got off to a 3-0-2 start with Crosby out of the lineup while recovering from surgery on his left wrist, but they have dropped three straight entering their first meeting this season with the Flyers.

This is not Reirden's debut as a head coach. He spent two years as the head coach in Washington from 2018-20 before returning for a second stint as an assistant in Pittsburgh, where he worked under Dan Bylsma from 2010-14.