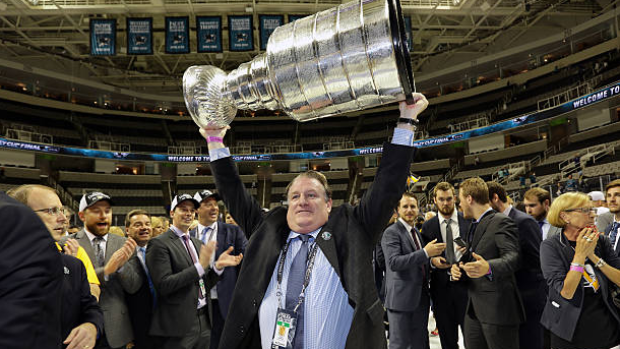 The Pittsburgh Penguins are accused in a lawsuit of hiring and retaining a coach they knew to be a serial sexual harasser who is alleged to have assaulted another coach’s wife during a team road trip.

Jarrod Skalde, a former assistant coach with the Penguins’ American Hockey League affiliate the Wilkes-Barre/Scranton Penguins, alleges in a lawsuit filed Nov. 3 in U.S. District Court in Pennsylvania that then Wilkes-Barre/Scranton head coach Clark Donatelli assaulted his wife, Erin, when the three of them were in a car together during a team road trip in Providence, R.I.

The allegations against the Penguins, the Lemieux Group, which owns and operates the NHL franchise, and Donatelli have not been proven. A lawyer for the Penguins wrote in an email to TSN on Saturday that the team has filed a motion to dismiss the lawsuit.

After the Skaldes and Donatelli had dinner together following a game on Nov. 11, 2018, and prepared to return to their hotel, the Skaldes allege in their claim that Donatelli sexually assaulted Erin when they were briefly alone, first putting his arm around her, calling her “sexy” and pulling her close to him.

“Mrs. Skalde tried to fight off his sexual advances and told him to stop, but to no avail, as Mr. Donatelli escalated his attack, including reaching his hands into Mrs. Skalde’s shirt and repeatedly touching her breasts,” the lawsuit alleges.

Skalde returned to his wife and Donatelli a few minutes later and they took a car-ride service back to the hotel. Donatelli insisted that he sit in the back seat with Erin for the ride, and that Skalde sit in the front.

“Still in shock and uncertain what to do in response to her husband’s boss sexually assaulting her, Mrs. Skalde fearfully entered the back seat of the car, trying to put as much distance between herself and Mr. Donatelli as she could, to avoid him again sexually touching her,” the lawsuit says.

“Mr. Donatelli resumed his sexual assault and battery of Mrs. Skalde once he had her in the darkness of the backseat. He not only groped her breasts again, but also forced his hands down her pants and touched her vagina, despite her efforts to push him away… Only later did Mr. Skalde find out what happened to his wife that night, shaking him to the core to learn that he had sat unknowingly in the front seat as his boss has sexually assaulted his wife.”

Skalde alleges that seven months later, when the incident was brought to the attention of Penguins’ assistant general manager Bill Guerin, whose duties included overseeing the NHL team’s AHL operation, Guerin told Skalde to keep quiet about the alleged assault. He alleges the NHL team has violated Pennsylvania’s whistleblower laws and fired him on May 5, 2020, because he complained to the team.

Guerin left the Penguins organization when he was hired as general manager of the Minnesota Wild in August of 2019. Guerin declined comment through Wild director of media relations Aaron Sickman.

The Skaldes have requested damages for physical and emotional pain and mental suffering and loss of income. They have not clarified the amount of money they’re seeking.

CTV News and TSN have a policy against naming victims of sexual assault without their consent. Erin said in an interview on Sunday that she supported having her name published and details of her allegations reported.

The Penguins allege in their motion to dismiss the case that Skalde should not be afforded protections under Pennsylvania's whistleblower laws because he didn't notify the team about the alleged assault within 180 days of the incident, which the team says is required under state laws.

“The team investigated and took immediate action in June 2019 when notified of the alleged incident, which Mr. Skalde reported seven months after it allegedly occurred,” Penguins lawyer Lori Armstrong wrote. ”Mr. Skalde continued to coach for the team [Wilkes-Barre/Scranton] for an additional year, when his contract was not renewed due to the impact of the COVID-19 pandemic. The allegations made against the team have no merit, and we have moved to dismiss the complaint.”

The Skaldes didn’t immediately report the assault to the Penguins “because they had never experienced such an attack and were unsure what to do,” the lawsuit says. “The Skaldes also were concerned that reporting the conduct could lead to retaliation and create a crisis for the Wilkes-Barre/Scranton Penguins in the middle of the season, causing harm to the team and its players through no fault of the Skaldes.”

Skalde said Monday that the alleged incident was never reported to police. He did confront Donatelli about the alleged sexual assault on May 15, 2019, the lawsuit contends.

“Donatelli claimed he was too drunk to recall the events of the night in question, but six days later, he met with Jarrod Skalde and apologized,” the claim says. After Erin Skalde confronted Donatelli, the lawsuit says “Donatelli pledged to Mr. and Mrs. Skalde that he would change his ways, seek help, and come forward to the Penguins’ assistant general manager Billy Guerin about what he had done.”

When Donatelli failed to follow through with telling Guerin about his behaviour or changing his ways, Skalde alleges he reported the sexual assault to Guerin at the NHL Draft in Vancouver on June 21, 2019.

Four days later, Skalde met with a Penguins’ lawyer to discuss the assault. The Penguins never contacted Erin to interview her about what happened, apologize for the assault, or provide any expression of support or remorse, the Skaldes allege.

On June 28, 2019, the Penguins announced Donatelli had resigned for personal reasons.

“Guerin later advised Mr. Skalde that the Penguins were terminating Mr. Donatelli’s employment, but instructed [Jarrod] that knowledge of the incident and termination had to be suppressed, cautioning that it ‘has to stay quiet and can’t be let out,’” the lawsuit says.

As the 2019-20 AHL season began, the Penguins stripped Skalde of his duties coaching the power-play units, he said, and eight months later, on May 5, 2020, Skalde says the Penguins fired him, telling him his job was being eliminated because of COVID-19-related cutbacks.

“Of the 21 employees handling hockey operations for the Penguins, team management selected only Mr. Skalde for termination – and told him it had nothing to do with his performance, which was ‘great,’” the lawsuit says. “But of course, Mr. Skalde also happened to be the only one who had complained about the unlawful sexual assault and battery of his wife by a Penguins coach.”

The Skaldes also allege in their 22-page claim that they learned of “countless other episodes of inappropriate conduct by Mr. Donatelli, sexual and otherwise, which apparently the Penguins were aware of but did little or nothing to stop. Donatelli’s misconduct… was well-known by the Penguins management, but tolerated because he was a successful coach.”

The lawsuit says the Penguins should have been on notice about Donatelli’s conduct, which allegedly included making crude and physical sexual advances on women while working for the organization, and having sexual relations with lower-level staff at Mohegan Sun Arena, where the AHL team plays its home games.

“The Penguins were fully aware of this conduct, and that it put others, especially women, at high risk of being sexually assaulted by him, but continued to tolerate it and took no action to protect employees, family members or others who came in contact with Donatelli through his powerful position as a head coach for the Penguins,” the lawsuit says.

Skalde, 49, was drafted by the New Jersey Devils in 1989 and went on to play 115 NHL games before moving on to coaching. The Pittsburgh Penguins hired the former East Coast Hockey League coach of the year in 2017 after he worked as a head coach with the Ontario Hockey League’s Guelph Storm. He was sent to Wilkes-Barre as a player development coach and reported to Donatelli.