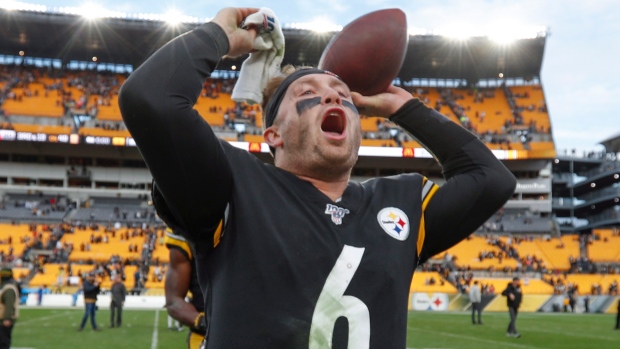 GLENDALE, Ariz. — The Arizona Cardinals have a No. 1 overall draft pick under centre while the Pittsburgh Steelers have a guy named “Duck” throwing the ball around the field.

Yet it's the Steelers who are making a playoff push.

Pittsburgh (7-5) has won six of its past seven games heading into Sunday's road matchup against the Cardinals. It'll be the third start for Steelers quarterback Devlin “Duck” Hodges, a rookie free agent who has been steady for a team that relies heavily on its defence.

Hodges threw for 212 yards, one touchdown and one interception in last week's win against Cleveland. Steelers coach Mike Tomlin expects more of the same against the Cardinals.

“Football is the ultimate team game,” Tomlin said. “We try to live that out every day. When guys step up and deliver, it is just verification of it.”

The Cardinals (3-8-1) are stuck in a five-game losing streak and trying to bounce back from last weekend's 34-7 loss to the Rams, which was easily their worst effort of the season.

Arizona is rebuilding this season, so the team has been mostly upbeat even after losses. But players and coaches have made it known that getting embarrassed at home by the Rams wasn't acceptable. The Cardinals were down 20-0 by halftime and were never particularly competitive.

“Losing is losing, but that last game was a different type of losing," rookie quarterback Kyler Murray said.

Murray, the top overall pick in April, has been good for most of the season. He's already set a franchise rookie record with 2,866 yards passing despite a tough game against the Rams.

Most of the Cardinals problems are on defence, where they rank last in the NFL in total defence and passing defence. Los Angeles quarterback Jared Goff — who had been struggling for a few weeks — dominated the Cardinals for 424 yards passing and two touchdowns.

Kingsbury had a short, nomadic career as an NFL quarterback, bouncing between teams over a couple of seasons before becoming a coach. He said Hodges is making the most of his opportunity.

“I’ve been very impressed," Kingsbury said. “Having been in a similar situation, kind of that third-team practice-squad-type range, for him to step in and the poise he shows and protecting the football, you can tell those guys really play hard for him, and they believe in him. He moves around, makes some plays, and he’s been really sharp."

Kingsbury was excited to have all three of the team's main running backs — Kenyan Drake, David Johnson and Chase Edmonds — healthy for the first time against the Rams on Sunday.

But the Cardinals offence never got on track. Drake ran for 31 yards, Johnson ran for 15 and Edmonds didn't get a carry.

Kingsbury said he still envisions a roll for all three against the Steelers.

“The (Rams) game got away from us, got a little funky, and we got out of some things we wanted to do and went back to dropping back, which is not what we want to do in those situations,” Kingsbury said. "That’s why you have to stay on schedule and can’t get down 27-0 or whatever it was.”

If the Cardinals are going to get better defending the pass, they'll have to do it with a bunch of young players.

The Cardinals also have three rookies in the secondary who get substantial playing time, including cornerback Byron Murphy Jr. and safeties Jalen Thompson and Deionte Thompson.

Steelers centre Maurkice Pouncey returns to the lineup following a two-game suspension for his role in the brawl against Cleveland on Nov. 14. B.J. Finney filled in capably during Pouncey’s absence and Pittsburgh’s running game finally found some traction, topping 100 yards in consecutive contests for the first time this season. Pouncey said the unexpected break has the 10-year veteran feeling fresh heading into the home stretch.

“I feel like this is the beginning of the year,” Pouncey said. “I’ve got a lot of energy.”

The Walter Payton Award is given to the best offensive college player at the Football Championship Subdivision level.

“Now that you mention it, it is pretty unique playing against the Heisman winner and being the Walter Payton winner, the Heisman of the FCS. It is going to be a fun game,” Hodges said.

Pittsburgh outside linebackers T.J. Watt and Bud Dupree have combined for 20 1/2 sacks through 12 games, the highest total by a Steelers’ linebacker tandem since LaMarr Woodley and James Harrison did it in 2008. Watt was the AFC Defensive Player of the Month for November after getting 5 1/2 sacks last month. Watt has at least a half-sack in nine straight games, the longest active streak in the NFL. Dupree has been no slouch. His 8 1/2 sacks are a career high and his four forced fumbles are tied for fourth most in the NFL. Though Dupree typically plays on the left side and Watt on the right, Tomlin will occasionally have them flip to give offences different looks.

“They’re interchangeable in an effort to keep people off-balance and to give them something to think about,” Tomlin said.

AP Sports Writer Will Graves in Pittsburgh contributed to this story.