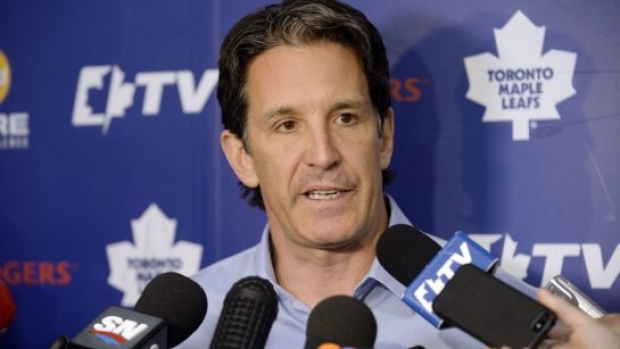 Former players suing the NHL over its handling of concussions have asked a judge to order Toronto Maple Leafs president Brendan Shanahan to travel to Minnesota to be deposed in the case.

Shanahan to this point has refused to cooperate with lawyers for the former players, according to court documents.

Shanahan said in a statement that he is pleased to offer testimony in the case.

"I was never opposed to giving a deposition," he said in a written statement provided by the Maple Leafs. "My response was that I was happy to cooperate and I provided upcoming dates that hopefully work for both sides. My understanding is that it is in the process of being scheduled."

The former players want a U.S. federal court judge to request the Ontario Ministry of the Attorney General to issue Shanahan with a subpoena.

“As the former senior vice president of player safety and operations, Shanahan has first-hand knowledge of the importance of injuries sustained, particularly concussions, to the discipline imposed on players who violate rules,” lawyers for the former players wrote in court papers obtained by TSN.

“Shanahan’s testimony cannot be obtained by any practical alternative means because he refuses to appear voluntarily for his deposition.”

A group of 60 former NHL players including Joe Murphy, Bernie Nicholls and Gary Leeman charge that the NHL knew or ought to have known from medical and scientific research that head trauma suffered by NHL players put them at a significantly greater risk for developing long-term brain disorders.

Too often, the former players said, they were given quick fixes such as smelling salts and sent back into games after suffering concussions.

The former NHL players filed the suit in November 2013 after a group of nearly 4,500 former NFL players reached a settlement with the NFL over similar concussion-related complaints.

The hockey lawsuit has not been certified as a class action. If a judge does grant the case class-action status, which some lawyers say is uncertain, the case could involve several thousand former NHL players, unless they opt out of the case.

The request that Shanahan be ordered to testify comes weeks after a judge ordered NHL Commissioner Gary Bettman to offer testimony in the lawsuit.

The NHL had argued that Bettman shouldn't immediately be compelled to answer questions about concussions and brain injuries to players. A judge said Bettman may be deposed in July 2015.

The judge made the ruling even though she noted that, "the NHL does not necessarily ask that Commissioner Bettman be deposed last, but objects to him being deposed first."

Shanahan, meantime, is, “a former NHL player who personally suffered concussions during his 21-year playing career with the NHL,” the lawyers for the former players wrote. “Shanahan is familiar with how the NHL historically responded to and treated concussions and the violent culture of the game.”

Shanahan himself participated in at least 97 major fights. He suffered at least one concussion on Feb. 17, 2007, that left him with vertigo and caused him to miss 15 games.

Between June 2011 and April 2014, Shanahan served as the senior vice president of player safety and hockey operations and worked with the NHL Players’ Association to improve player safety.

“Shanahan refuses to voluntarily appear for his deposition, even though Plaintiffs had offered to depose him at a convenient location in Canada,” court documents say. “Instead, he informed (lawyers for the former players) that they must compel his testimony through international procedural channels.”

Although Shanahan was born in Canada, he became a naturalized U.S. citizen on May 16, 2002, court documents say.

The former players’ lawyers said they would pay Shanahan’s travel costs for a deposition in Minnesota.

Lawyers for the former players may make oral arguments about Shanahan’s testimony during a June 17 hearing.