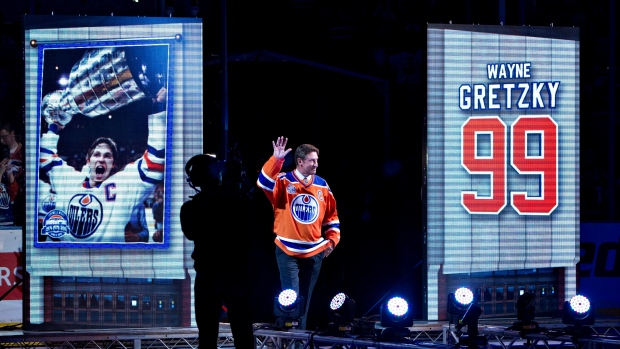 EDMONTON - Wayne Gretzky stood at centre ice in the building he made famous Wednesday night and saluted the fans.

"My gosh, I wish we could be out there and play for them again but we can't do it anymore," Gretzky said to cheers from thousands of supporters —most clad in orange, blue and white team jerseys — in a tribute ceremony to mark the final Oilers game at Rexall Place.

"The greatest thing about hockey is the people you meet," he added.

"The friendships I have, the memories, there's nothing like it. It's the greatest game in the world."

Gretzky was among scores of former Oilers of the NHL and World Hockey Association eras to join fans bidding goodbye to the rink after almost 42 years of hockey.

Before the game, fans watched the current Oilers, in their retro orange jerseys, down the Vancouver Canucks 6-2.

The game was called on television by Bob Cole, the broadcaster who was at the mic when the Oilers began their Stanley Cup dynasty run in the 1980s.

Before the game, Gretzky and his family posed for photos outside Rexall Place in front of the life-size bronze statue of Gretzky holding aloft the Stanley Cup.

The statue was erected in 1989, a year after Gretzky was traded to the Los Angeles Kings, to commemorate his contributions to the Oilers.

The first game was played Nov. 10, 1974, when the Oilers were still in the World Hockey Association.

That night, the Oilers and goalie Jacques Plante defeated netminder Gerry Cheevers and the Cleveland Crusaders 4-1.

The rink was still a work in progress at that point due to numerous construction delays. Crews were still installing seats as fans filed into the building that night.

Many of the building's signature memories revolve around Gretzky.

He led the team to four of their five Stanley Cups, the first one captured at home on May 19, 1984.

On Dec. 30, 1981, hometown fans roared as Gretzky scored five times on the Philadelphia Flyers to seal a record 50 goals in 39 games.

On Oct. 15, 1989, Gretzky returned to Edmonton as a member of the Kings to set the all-time NHL points record of 1,851, surpassing Gordie Howe.

He is the leading point-getter at Rexall with 933 points in the team's NHL era.

In the NHL, the Oilers played 1,428 regular season games and 129 playoff games in Rexall.

The Oilers move into the new downtown Rogers Place in the fall.

The future of Rexall Place is uncertain.

In February, the non-profit Northlands board that runs the complex pitched converting it into an amateur sports multiplex, with seven ice surfaces.

The Oilers finish the regular season with a rematch against the Canucks on Saturday in Vancouver.

This fall, they will begin a new chapter, but one with a sobering introduction.

The team will miss the playoffs for a 10th consecutive season this year, matching the record for futility set by the Florida Panthers.

Messier addressed that issue earlier Wednesday, when he and about 100 of the Oilers alumni celebrated with fans in a ceremony outside City Hall.

Messier said the team's journey continues in the new rink, "making more memories, winning more Stanley Cups, and bringing back and restoring the pride that we've all felt behind this team for so many years."