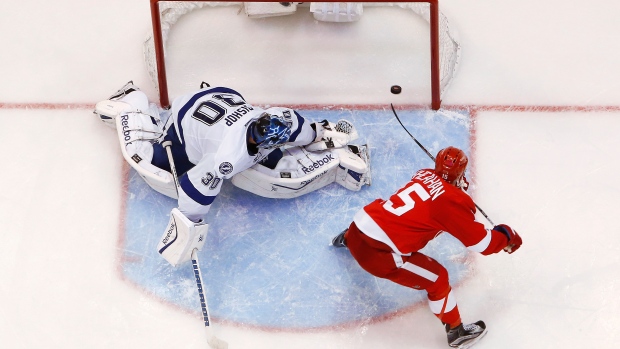 DETROIT - Facing elimination going into Joe Louis Arena for Game 6, Tyler Johnson figured the Tampa Bay Lightning had two choices: "Either you give up or you come out swinging."

Then there was the other thing coach Jon Cooper heard from his players before they put on their best performance to beat the Detroit Red Wings on Monday night.

"All the guys kept saying, 'Two of the greatest words put beside each other in any sport: Game 7,'" Cooper recalled.

Game 7 is Wednesday night at Amalie Arena in Tampa, with a spot in the second round and a meeting with the Atlantic Division-champion Montreal Canadiens at stake. It'll either be the first Red Wings-Canadiens playoff series since 1978, or a rematch of last year when Montreal swept Tampa Bay in the first round.

But forget about history. The Red Wings and Lightning have been able to shed the memory of each game in this series, so much that the teams have alternated victories.

That was the message from Red Wings coach Mike Babcock after his team's 5-2 loss Monday night at home.

"We have to get our mind right again and get ready for a Game 7," Babcock said. "No team's been able to win two games in a row thus far in the series, so let's go to Tampa."

The Red Wings won two of their first three games in Tampa this series. That softened the blow of missing the opportunity to close things out in six in Detroit.

"To play at home in the Joe in front of fans is amazing," forward Tomas Tatar said. "But we're not afraid to play in their building either. We're looking forward and we're ready."

Everyone thought the Lightning would be primed and ready at home in Game 5 with the series tied at two games apiece. Instead Petr Mrazek shut them out again.

It's been that kind of unpredictable, evolving playoff series. Detroit captain Henrik Zetterberg said it's no surprise to the Wings that the series is going to a seventh game, and the same can be said from Tampa Bay's side.

"We lost some games that we didn't want to obviously lose," Lightning forward Brian Boyle said. "But we're still playing in a playoff series. We haven't lost the series. We've had opportunities to rectify situations and we've done that. We've kept positive. It's not the end of the world if you lose a game if the series isn't over.

"You keep going, you're still alive."

The Lightning stayed alive thanks to two highlight-reel goals from Johnson, who's at six for the series, and one each from Jason Garrison and Alex Killorn. Now, Johnson said, they're out to put up back-to-back wins and "change history."

"Not a lot of guys have played in Game 7, but I think we're excited for the challenge," Killorn said.

From Babcock's perspective the challenge is in playing a prototypical road game.

"We're going into their building, you've always got to play a 10-minute game and a 50-minute game on the road in the playoffs," Babcock said. "You've got to get it settled down the first 10 minutes and then you get on with playing. Let's get ready to play."