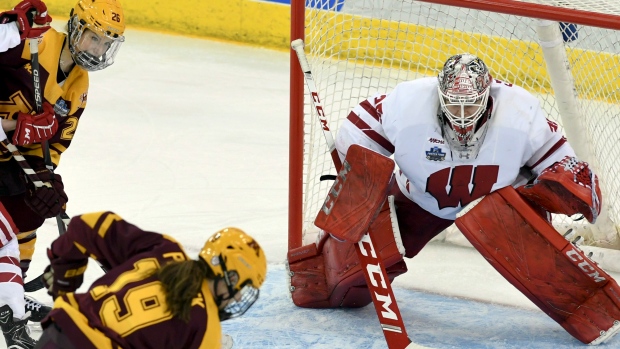 Hockey Canada announced its Olympic centralization roster on Wednesday for the national women’s team, and there were plenty of surprises.

Twenty-eight players have been selected to assemble in Calgary this summer to begin preparation for the 2022 Olympic Games in Beijing. The list includes three goaltenders, nine defencemen and 16 forwards. Fourteen of those players helped Canada earn silver at the 2018 Olympics.

Players and staff will relocate to Calgary in July to begin the centralization process and prepare for the upcoming IIHF Women’s World Hockey Championship, which is scheduled for Aug. 20-31 at a location still to be announced. The final Olympic roster is expected to be revealed in December.

“Bringing our group together now is really a huge step forward,” Gina Kingsbury, the director of Canada’s women’s national team, told TSN. “It will give us the opportunity to build our team moving forward. We’re really looking forward to that time together.”

The selection process has been unique this year. Due to COVID-19, there has been only one world championship since the 2018 Olympics (in 2019). Last year’s tournament was cancelled, and this year’s women’s worlds has been pushed back to August after originally being scheduled to be held in Halifax and Truro, N.S. this month.

“It’s been a challenge for everyone involved,” said Kingsbury. “Obviously we’re not the only sport to have been impacted by the pandemic, but for women’s hockey, it’s been a trial for the past couple of years.”

“In a lot of respects, I think the periodization of this whole process has been thrown off by the pandemic,” said Cheryl Pounder, a two-time Olympic gold medallist and TSN hockey analyst. “It’s been difficult to assess and evaluate.”

Many of Canada’s players have seen limited ice time over the past year, with even fewer taking part in meaningful games – the exception being NCAA players. The Canadian teams in the Professional Women's Hockey Players Association have not played in more than a year due to the pandemic. The teams in Calgary, Toronto and Montreal are set to play in a Canadian leg of the PWHPA’s Dream Gap Tour May 24-30 in Calgary.

There have been two camps held by Hockey Canada this year for player evaluation.

“I do wish Hockey Canada was able to take more players, given the situation, because the evaluation process has been halted because of the lack of play and lack of meaningful competition over the last few years,” said Pounder.

While the roster boasts plenty of big names like Marie-Philip Poulin, Mélodie Daoust and Renata Fast, there are also several notable omissions and inclusions. Here are three of the biggest surprises.

Kristen Campbell, 23, was one of the three goaltenders selected, along with Ann-Renée Desbiens and Emerance Maschmeyer. Campbell, who has yet to suit up for Canada at the senior level, was chosen over veteran Geneviève Lacasse.

Lacasse has almost a decade of experience at the international level. She has won two Olympic medals, including gold at the 2014 Games in Sochi, and has taken home five world championship medals.

Of the six goaltenders who were part of Canada’s most recent camp, Lacasse was the only goalie to have won a world championship title, taking home gold in 2012. She has also raised the Clarkson Cup twice and was named CWHL Goaltender of the Year in 2013.

“Genevieve has been a pinnacle part of the program for a long period of time,” said Pounder. “For her, she’ll surely be missed. She’s a player who brings a lot of spirit. She has the ability to go into a game cold and get the job done, as well as start.”

Campbell is somewhat of an unknown entity, at least on the international stage. She represented Canada at the 2015 IIHF U18 Women’s World Championship, making her lone appearance in the tournament in a 3-2 win over Russia.

But like many of her Canadian teammates, Campbell has not seen much ice time in the past year. Her senior year with Wisconsin in 2020 was cut short due to the pandemic. She had joined the Badgers after being forced to transfer from North Dakota after the university dropped its women’s hockey program.

Campbell, a native of Brandon, Man., thrived with the Badgers. In 2018 she was a top-10 finalist for the Patty Kazmaier Award, given annually to the best collegiate player in women’s hockey. The following year, she backstopped Wisconsin to the NCAA Championship.

But Campbell has not had many opportunities to prove herself since her collegiate career ended abruptly in 2020. She is currently a member of Team Scotiabank in the Calgary region of PWHPA.

The three Canadians who have most recently won the Patty Kazmaier Award – presented annually to the top player in NCAA Division I women’s hockey – are not on the centralization roster: forwards Élizabeth Giguère, Loren Gabel and Daryl Watts.

Watts and Gabel are especially noteworthy omissions. Watts, who was the first freshman to ever win the Patty Kazmaier Award in 2018, was also one of the three finalists for the honour this year, ultimately losing to American goaltender Aerin Frankel. Watts led the nation this season with 1.71 points per game, and she scored the OT winner for Wisconsin in the NCAA championship game.

“She’s a prolific goal scorer. She has the ability to put the puck in the net,” said Pounder. “She’s a young player who I think has a great trajectory, especially in the offensive zone.”

Kingsbury told TSN’s Frank Seravalli in March that Hockey Canada had had “[their] eye on Daryl for a while.”

“I’m cautiously optimistic because it is a different pace at a higher level, but we’re excited to see where she stacks up best-on-best with some of the best players in the world,” Kingsbury said.

Gabel, who won the Patty Kazmaier Award in 2019, was Canada’s breakout star at the 2019 world championship. She was tied with Natalie Spooner for the team lead with six goals, including two in the bronze-medal match against Russia, which Canada won 7-0. She also featured for Canada at the 2019-20 Rivalry Series against the U.S., recording a goal in the final game.

Gabel is Clarkson University’s all-time leading scorer with 116 goals and 213 points in 160 games. She also holds the school record for most goals in a season, notching 40 in her senior year in 2018-19.

“They are young, and they do represent that offensive gift to put the puck in the net,” Pounder said about Gabel and Watts. “They’re two players that I’m surprised were left off.”

Pounder also noted the likelihood of this year’s evaluations camps being more heavily weighted than usual due to the lack of playing time, which could have also been a contributing factor in the decision to cut Watts and Gabel.

“The evaluation process was curbed, so a lot was dependent on these particular camps,” she said. “When you’re putting a team together, you’re looking at combinations – who goes well together and what looks like it fits.”

Canada’s centralization roster is also missing several notable veterans from the blueline: Laura Fortino, Brigette Lacquette and Lauriane Rougeau. All three were part of the Olympic team that won silver in 2018.

Fortino has been a member of the senior team since 2011 and won gold with Canada at the 2014 Olympics. She has been a part of six world championships and helped her country take home the title in 2012, where she was also named a tournament all-star.

Lacquette and Rougeau have combined for more than 100 games with the national team. Rougeau was also part of the gold-medal winning squad at the 2014 Olympics, and she has won five world championship medals, including gold in 2012.

Lacquette has been a mainstay with the team since 2015 and finished with a plus-7 rating at the 2019 world championship, second only to Renata Fast among Canadian defencemen.

“Those three athletes have been solid – the PK with Rougeau, the shot with Lacquette and the mobility of Fortino,” said Pounder. “I think it makes you recognize how difficult this process is to actually crack this lineup because of the depth in this country. It’s a very difficult day for those who aren’t chosen and it’s an exciting one for those who are.”

The three exclusions leave Canada with a decidedly less experienced blueline. Only three of the nine defencemen named to the roster have previous Olympic experience: Jocelyne Larocque, Meaghan Mikkelson and Fast.

“We also need to look at the future. We have to look at 2026 [Olympics] and beyond,” said Kingsbury. “We can’t forget about the experience and what that brings to our roster. I really like the mix. We brought some young athletes that our mature and ready to play a role for us… and we brought some veterans that I know will lead the way, take charge and be a force for our roster.”