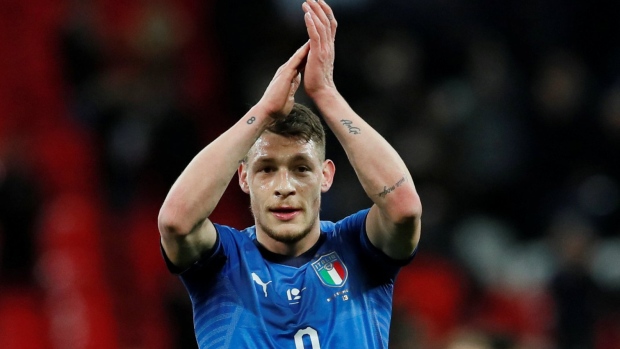 All eyes will be on the Stadio Olimpico in Rome, Italy when Euro 2020 kicks off on June 11.

Italy, the betting favourite to win Group A at -175 odds, will open the tournament on home soil against one of its top challengers to finish atop the group standings in Turkey.

At +1100 odds to win it all, the Azzurri are being somewhat overlooked in the outright winner market.

However, a first-place finish in the group stage could significantly boost Italy’s hopes for a deep run, especially when you consider the tournament format, with four third-place teams slated to make it to the knockout phase.

Every game is important, but a win over Turkey in the opener will create a clear path for Roberto Mancini’s men to finish atop their group.

On the flip side, a strong showing in the first match of Euro 2020 is equally important for Turkey.

Since then, Turkey’s odds to win it all have shortened to 50-to-1.

Still considered a major long shot, any chance Senol Gunes’ side has to surprise starts with its highly anticipated opener.

Turkey has never won a head-to-head meeting versus the Italians.

At +450 odds to win its group, the stage is set for Turkey’s all-in moment versus Italy on June 11.

One of two teams to finish qualifying with a perfect record, Italy was fortunate to avoid top contenders like France and Portugal in the Euro draw.

The Azzurri landed in a group with Turkey, Switzerland and Wales, all of which are currently listed at 50-to-1 odds or longer to win Euro 2020.

After winning all 10 qualifying matches, Italy is the obvious choice as the favourite to win Group A at -175 odds.

However, even after a perfect qualifying campaign and with home-field advantage for the group stage, Italy remains the eighth choice to win Euro 2020 at +1100 odds.

The Italians once again project to be one of the most defensively sound teams in the tournament.

The concern is whether or not an attack featuring Ciro Immobile and Lorenzo Insigne can score enough goals to lead a championship run.

Immobile is currently the seventh choice to lead the tournament in goals at +2500 odds.

If they can find a way to take three points versus Turkey in their opener, it will solidify the Azzurri’s path to the knockout phase.

Turkey is currently listed at +450 odds to win Group A – an 18.2 per cent implied probability. However, the Turkish side is -175 to advance to the knockout stage.

Similar to Italy, Turkey’s biggest strength is its defensive play.

The Crescent Stars will lean heavily on striker Cenk Tosun, who led the squad with five goals in the qualifying games.

After an impressive performance in the Euro qualifiers, it would be a major disappointment for Turkey if they don’t make it to the knockout stage.

A wild card in Group A, Switzerland will open its tournament as a heavy favourite versus Wales.

Similar to both Italy and Turkey, the strength of this Swiss side is their defensive play.

Up front, the Swiss will rely heavily on strike Haris Seferovic, who is projected to be their leading goal scorer at Euro 2020.

With showdowns against Italy and then Turkey to close out the group stage, it will be absolutely pivotal for Switzerland to pick up three points in its opener with Wales.

The Welsh side is no stranger to the underdog role.

In their first appearance at a European Championship in 2016, Wales advanced all the way to the semifinal.

However, a lot has changed since then and oddsmakers aren’t expecting another Cinderella run, as evidenced by the fact that Wales is +700 just to win Group A.

It doesn’t help that a Welsh side that has struggled to score goals leading up to the tournament landed in a group with three solid defensive teams.

Still, the fact that four third-place teams will book a spot in the Round of 16 leaves the door wide open for the Dragons.

Wales is -125 to advance to the knockout stage.