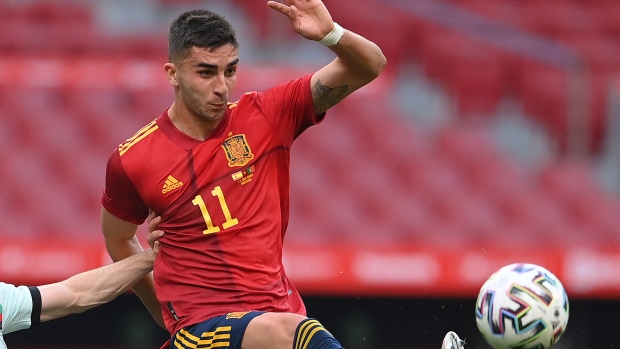 Since winning back-to-back European Championships that bookended a World Cup title, Spain has struggled to re-establish its dominance on the international stage.

La Furia Roja enter the European showcase among the favourites to win the tournament.

Only three teams have shorter odds to win the title.

In addition to a roster that is loaded with talent and depth, Spain will benefit from drawing a group that is considered among the weakest in the tournament according to oddsmakers.

Spain is -333 to finish first in Group E, which also features Poland, Sweden and Slovakia.

At -4000 to reach the knockout stage, it would be a major shock if Luis Enrique’s side did not make it to the Round of 16.

The goal remains to finish atop Group E and draw a matchup with a third-place team in the knockout stage.

The importance of locking up that top spot, combined with such a small window to hit their stride before the elimination games, will add to the urgency for Spain in the group stage.

Spain’s toughest test, at least on paper, will come on Matchday 2 versus Poland.

Spain will be a betting favourite versus Poland, but their odds to win that contest are much slimmer than their odds to beat Sweden and Slovakia.

Robert Lewandowski remains one of the top strikers in the world, and Poland has a lot to prove after disappointment at the 2018 World Cup.

If Spain’s merit is to be tested with an all-in moment in the group stage, it will likely come against Poland.

After an impressive qualifying run, Spain could be somewhat underestimated heading into this tournament.

In addition to talent and current form, their path to the quarter-finals is arguably the easiest among the betting favourites to win the title.

Spain is favoured to win all three group-stage matches, which will be played in front of their home fans in Seville.

As long as they finish atop their group, they will get a Round of 16 matchup with a third-place team.

While a potential quarter-final showdown with England looms, there won’t be any easy matchups by that point in the tournament anyway.

Spain, England and Belgium are co-favourites to be the highest scoring team at Euro 2020 at +500 odds.

There’s no doubt that the expectation for a deep tournament run was factored in to that price.

Poland is a long shot to contend at Euro 2020, but they are expected to get out of their group.

Lewandowski and company are -225 to advance to the knockout stage – a 69.2 per cent implied probability.

Coming off a record season in which he scored 41 goals in the German Bundesliga, Lewandowski is +2500 to win the Golden Boot – the ninth choice on the board.

While he isn’t among the top choices, it’s important to keep in mind how heavily a deep tournament run is factored into those prices, with the favourites to win the award all leading teams expected to contend for the title.

Poland won’t win Euro 2020, but they could emerge as the team that gives Spain its biggest challenge in Group E.

Coming off its first quarter-final appearance at the World Cup since 1994, Sweden is +250 to reach the quarters at Euro 2020.

The third choice to qualify for the knockout stage out of Group E at -185, Sweden’s chances would certainly improve with at least a draw in its tournament opener versus Spain.

While some questioned the potential impact a 39-year-old Zlatan Ibrahimovic could have had before he was sidelined with an injury, a lack of attacking options up front remains the biggest question mark for Janne Andersson’s side without the veteran striker available.

Only seven teams have shorter odds to be the lowest- scoring team in the tournament.

Even if they find their way past the group stage, a lack of scoring power will likely be what limits Sweden’s chances to make a deep run.

Twenty-four teams will compete at Euro 2020.

Here is the list of teams with longer odds to win the tournament than Slovakia: North Macedonia, Finland and Hungary.

While they managed to grind their way to the knockout stage in 2016, the odds are against the current Slovakia roster surprising again this time around.

The biggest issue for Pavel Hapal’s side is up front.

While the midfield is considered a team strength, the lack of finishing options up front is the biggest reason why oddsmakers are so down on this team’s chances.

Slovakia will be an underdog in each of its three group stage matches.

Factoring in a difficult group and their lack of scoring punch, it wouldn’t be a surprise if Slovakia ended up as the lowest-scoring team in the tournament at +800 odds.