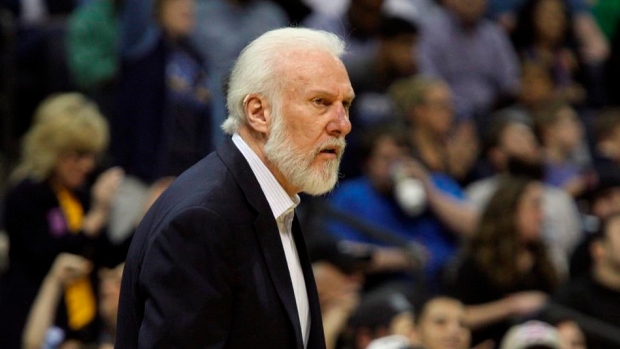 MINNEAPOLIS — As the godfather of the NBA's modern player rest movement, San Antonio Spurs coach Gregg Popovich has long championed the importance of limiting the wear and tear on players' bodies in order to prolong their careers and increase the chances of deep runs in the post-season.

Commissioner Adam Silver has long been sympathetic to Popovich's point of view, acknowledging the science that proves what a difference rest can make.

But now that Silver is ramping up the pressure to consider more than just X's and O's when deciding when to rest players en masse, Popovich and other coaches around the league say they are eager to have dialogue with the league and its television partners to address an approach that is drawing the ire of fans and business partners.

"Luckily all the participants are sane people and care about the same thing and want to get it right," Popovich said on Tuesday before the Spurs played the Minnesota Timberwolves.

"It's not about anybody having power or wanting to issue orders. It's about trying to get it right. That's the great thing about the league and what we're doing. It's all good."

The issue was thrust to the forefront in the past two weeks when the Golden State Warriors and Cleveland Cavaliers each sat their stars for national television games on consecutive Saturdays.

After ABC/ESPN and Turner paid a combined $24 billion for the broadcast rights, the practice made several stakeholders uneasy.

The 2017-18 regular season will begin early to help the league reduce the number of back-to-backs and stretches of four games in five nights.

And Popovich said they should also look at tailoring the national television schedule to avoid games that have one team at the tail end of a grueling part of the schedule.

He also said coaches should consider trying to rest players at home more than on the road, where fans don't have the chance to see their favourite players as often.

"Whatever it is, more discussion with TV partners so the product isn't put in that type of position. There is an inordinate number of games that are national that do end up in the back-to-back sort of situation," Popovich said. "There's a lot of stuff here both ways that could be done."

Silver issued a memo to the league's owners imploring them to take a more active role in the decision-making process, saying it can "damage the perception of our game."

"I love what Adam is doing for our league, but I don't see how that (would help)," Cavaliers star LeBron James told reporters at practice in Los Angeles on Tuesday. "I don't understand why it's become a problem now, because I sit out a couple games?"

Minnesota coach Tom Thibodeau suggested looking at the proximity of a back-to-back in hopes of allowing teams to get into town as early as possible.

"I don't think anyone wants to see what's happening," Thibodeau said. "We certainly understand there is a business side to it. There is the rest side. And the health of the players. I think if we take a hard look we can find a solution to it."

Miami coach Erik Spoelstra said he was on board with the idea of better tailoring the schedule to accommodate national television.

"It makes sense that our best product is being shown to the masses," Spoelstra said. "And if that's not happening then we need to figure out how to find a solution."

The problem, as Popovich sees it, is that the Spurs approach has withstood the test of time. San Antonio has won five championships and Tim Duncan, Manu Ginobili and Tony Parker have all enjoyed long careers and remained effective as they got older in part due to San Antonio's commitment to rest.

Despite perception, Popovich said he understands the nuances involved and feels particularly bad for the fans that spend money on tickets to see their favourite players, only to be disappointed when they rest.

He said he thought a proposal by former coach Byron Scott on ESPN to try to do the bulk of the resting at home as opposed to on the road "a great, great suggestion."

"That's a tough one. You can say, well that's life and everything doesn't go your way in life," Popovich said of fans who are let down. "But I think it's our responsibility to try and balance it if we can."