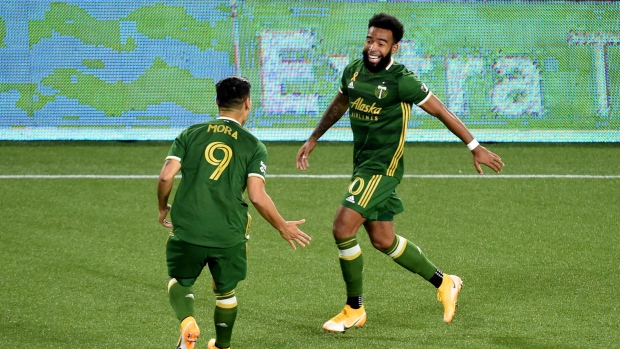 The 'Caps (5-9-0) dropped a 1-0 decision to the Portland Timbers, extending the club's losing skid to two games.

"Sometimes that's how soccer goes — you play well and you lose 1-0," Nerwinski said after the game. "But it's something that we can definitely build off of going forward."

Despite the final score, the game was something of a bounce back for Vancouver, coming after an ugly 6-0 thrashing at the hands of Los Angeles FC on Wednesday.

The loss in L.A. saw the 'Caps go down two minutes in when Dejan Jakovic scored off a corner kick. Vancouver crumbled in the aftermath, allowing four goals in just 14 minutes.

Just five minutes in, Eryk Williamson sent a ball into the danger area on a free kick. Felipe Mora got his head on it, redirecting the ball in past Vancouver 'keeper Bryan Meredith to put the Timbers on the scoreboard.

This time out, however, the Whitecaps kept their composure and even had a good chance for a quick response.

In the seventh minute, Ali Adnan lofted a high ball into the Timbers box where Andy Rose tried to head it in. His shot caught the far post instead.

"I think that just shows the growth that we have in this team," Nerwinski said. "We regrouped quick. ... We didn't fold easy."

Though Portland controlled 58 per cent of possession through the first half, Vancouver stayed strong defensively and tested the Timbers in tight.

Whitecaps striker Lucas Cavallini had a pair of chances to even the score but couldn't finish. One ball sailed over the cross bar while the other bounced just wide of the Portland net.

The 27-year-old Canadian admitted that not finishing was frustrated.

"There are chances that you sometimes regret missing. But it is what it is now. Today’s game is done," he said. "There’s no time to feel sorry and feel bad and have our heads down."

Fredy Montero and Andy Rose were also close to finding the net for Vancouver. Coach Marc Dos Santos said the 'Caps simply need to score on those opportunities.

"Those chances are big," he said. "You don't come to Portland and generate 20 chances. Nobody does that in the league. It's hard. It's a team that defends lower, it's a transition team so they don't give a lot of chances."

Steve Clark had three saves for the Timbers to collect his third clean sheet of the year.

Meredith stopped six shots in his second game for the 'Caps. He's the third 'keeper to play for Vancouver this season but Dos Santos confirmed after Sunday's game that he may not be the last.

Dos Santos said the Whitecaps are in the process of acquiring Evan Bush from the Montreal Impact, and details of the deal are still being ironed out.

He added that it is unlikely the team's star goalie Maxime Crepeau or backup Thomas Hasal will return to the lineup this season. Crepeau fractured his thumb at the MLS is Back tournament in July and Hasal suffered a head injury in Vancouver's 2-1 win over Real Salt Lake last week.

Despite playing the Timbers in Portland, the Whitecaps were technically the home team Sunday night. All three Canadian Major League Soccer clubs are playing the remaining games of the season in the U.S. and Portland is the 'Caps "home base."

On the TV broadcast, white and blue Whitecaps banners were superimposed over the seats in Providence Park and sounds of a cheering 'Caps crowed were piped in over the sound system.

Many of the club's players and staff plan to head back to Vancouver for a couple of days of rest and quarantine before facing the Sounders in Seattle on Oct. 3.

NOTES: Portland did not start a single designated player. ... Fredy Montero wore the captain's armband for the Whitecaps. The team's usual captain, Russell Teibert, sat out with an undisclosed injury.