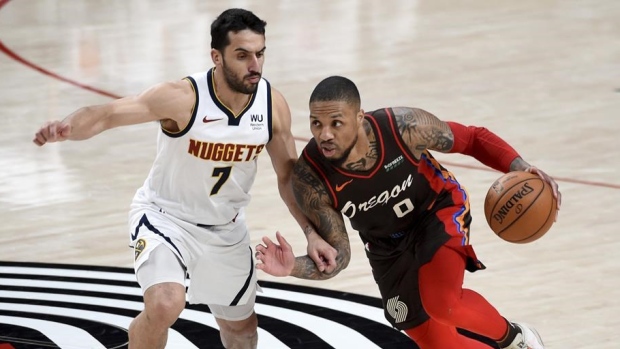 PORTLAND, Ore. (AP) — Damian Lillard had 22 points and 10 assists and the Portland Trail Blazers beat the Denver Nuggets 132-116 in the regular-season finale Sunday night to secure their eighth straight playoff berth, the longest active streak in the NBA.

The Blazers secured the sixth seed, which means they'll face the Nuggets in the opening round. Denver wound up with the third seed in a crazy night that saw the West's teams in a scramble for playoff position. Denver was assured of the No. 3 seed when the Clippers fell to the Thunder.

CJ McCollum added 24 points, including five 3-pointers, and the Blazers avoided the play-in round. Lillard also had five 3s.

The Nuggets, already guaranteed a spot in the playoffs, held their starters to limited minutes. Nikola Jokic had 21 points in the opening half then sat for the rest of the game.

Last season, the Nuggets went to the conference finals for the first time since 2009 but fell to the eventual champion Los Angeles Lakers.

Coach Michael Malone had said he wouldn't rest his starters, and indeed he did. But only Austin Rivers started the second.

Lillard's 3-pointer in the third quarter put Portland up 95-74. The Blazers pushed the lead to as many as 27 points.

The Blazers were coming off a 118-117 loss at Phoenix which snapped a five-game winning streak. Portland rebounded from a five-game losing streak last month to win nine of 11 heading into the regular-season finale.

The Nuggets had won three straight, capped by a 104-91 victory at Detroit.

Jusuf Nukic finished with 20 points and 13 rebounds for the Blazers.

Nuggets: Denver won the first two games against the Blazers this season. ... Denver was without Will Barton (hamstring) and P.J. Dozier (adductor). ... Malone insisted before the game he wasn't looking ahead to the playoffs: “I haven’t spent five minutes since we got into town here worrying about who we’re playing after tonight.”

Trail Blazers: With a 3-pointer in the opening quarter, Lillard snapped his own franchise record for made 3-pointers in a season (270). ... Lillard had scored 30 or more points in his last seven games, the longest stretch of his career.

The Blazers face the Nuggets in the opening round of the playoffs.